WHAT PRINCE CHARMING (AND OTHER DISNEY PRINCES) TAUGHT US

All of those Disney movies that our families insisted we watched left us all seriously disillusioned about life. Girls have complained about most of it, from the false advertisement of perfect hair, skin and teeth, to the idea of the happily ever after. But the guys are just as confused.

Girls keep talking, tweeting and Facebooking about wanting a prince, which leaves guys thinking they’re supposed to be princes. Let’s run over what the princes taught us in a quick 1, 2, 3 step lesson.

1. Stalking can be justified

Prince Charming literally ran after Cinderella. She pulled that classic “Oh I gotta go” and she didn’t even try to make up a fake text about her passed out BFF in the bathroom she needed to go help; this girl was sprinting Usain-Bolt-style. She left her diamond shoe behind and that’s against the rules of being a girl according to Marilyn Monroe.

But Prince Charming just uses it to go on a house-to-house hunt until he tracks her down. Also this guy obviously has a foot fetish but maybe Cinderella’s into it, no judgment. 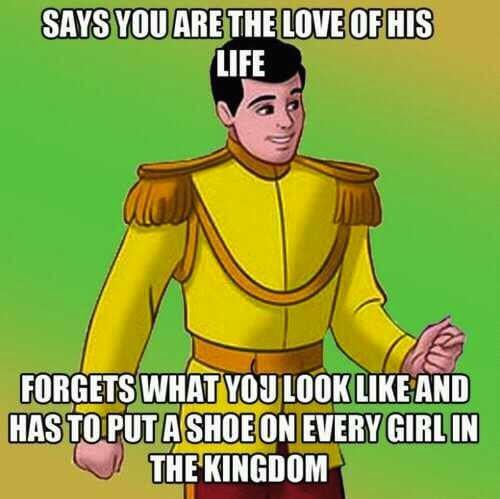 In real life, stalking is never okay. Legally, it’s a crime and a terrible move on Prince Charming’s part. Everyone likes the chase, but nobody living outside of a jail cell means that literally.

We’re led to believe that this is extremely romantic. This happens as frequently in Disney as it does on Dateline. Snow White’s Prince had no idea that his kiss would wake her up. At least Prince Philip explained his kiss with Sleeping Beauty by telling some far-fetched lie about dragons, spells and fairies.

He can’t do improv, but that’s a small flaw compared to this other guy who decides to mack on some girl that is probably dead. He decides to share lipstick, because his pout wasn’t already pink enough.

Another red flag is that he is nameless. Credits roll and he’s still just Prince. Why don’t you go ahead and report him as a sexual offender? Now maybe necrophilia is your thing, but it’s a pass for us. 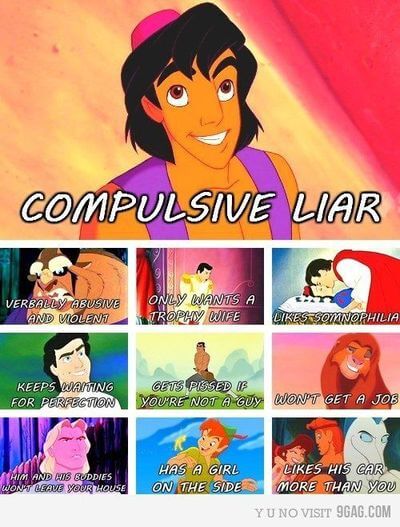 3. Serenading someone is always normal and appropriate

We also blame Glee for this, but at least Finn never climbed up Rachel’s balcony and propositioned her by asking, “Do you want a ride?” That’s Aladdin. This pretend prince even goes, “Do you trust me?” and Jasmine’s first reaction is a look of complete fear. But Jasmine has clearly never learned about stranger danger so she gets on the magic carpet. And then he starts singing about bringing her to a whole new world… um, that’s called abduction.

Guys, please resist bursting into song. If you don’t look like Zac Efron, no girl can forgive you for not sounding like him. Buy a CD instead.

And let’s not forget that in Enchanted, the guy who sings the duet – the actual prince does not end up with the princess. She marries a normal guy who didn’t sing to her. Ok, she did lots of singing herself but McDreamy probably just settled anyways because he was tired of Meredith narrating her life every 40 minutes.

Guys, if you follow Prince Charming’s advice then your “forever after” will be behind bars.

Previous Post:The Post-Valentine Break Up Playlist
Next Post:All The Things I Wish She Wouldn’t Do