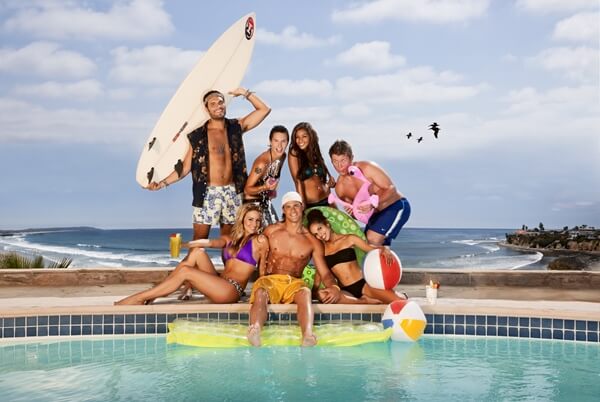 The grandpa of reality television, The Real World, has returned to San Diego for its 26th season. And once again, “seven strangers have been picked to live in a house work together and have their lives taped to find out what happens when people stop being polite and start getting real.”

Nate Stodghill, a 22-year-old Kansas native, is one seventh of this year’s cast – and he’s definitely taking advantage of the experience.

A self-described “conscious psychotic,” Stodghill got used to having his life taped pretty quickly.

“It took me a day to get used to it,” he said. “You are who you are and you have to be okay with it. Don’t be apologetic for it, just let America see you for who you are and don’t worry about the cameras.”

Before Stodghill was enjoying life on The Real World he was at the Missouri University of Science and Technology, living it up as a football player and fraternity member.

“I played football for 4 years, it was pretty cool. I suggest a varsity sport, especially as a freshman. It really structures your schedule,” Stodghill said. He admits his GPA was actually higher during the season.

But that wasn’t the only thing Stodghill learned in college. “College can go from the best time to a monotonous mundane. Keep your head on straight but have as much fun as possible. You have to realize you can’t just blackout everyday and skip class everyday. You need to find the balance and the earlier you find the balance, the better off you’ll be.”

However, Stodghill didn’t just join The Real World to party it up; he wanted to make the best out of the platform.

“I went into this thing and wanted to make something out of it and my story,” Stodghill said. “I wanted to network with the right people. [The Real World] was the right resource to make my dream.”

What is that dream? To be an advocate for suicide prevention and spread the message to others. Stodghill had lost several immediate family members to suicide and euthanasia and when he was 17, had a close friend commit suicide.

“There was an opportunity in the tragedy. I made sure to make the best situation out of the dark tunnel,” Stodghill said.

The Real World gave Stodghill a platform to share his experience and help others through The Living Memoir. The Living Memoir is an online blog where people can tell their story, ask the world for help or offer help themselves. The mission of the blog “is simple: Learn, Laugh, Love & Live Forever,” according to its website.

In addition to serving as an online community for suicide prevention, The Living Memoir also sells merchandise to help raise money for the cause.

So what motivational words does a guy like Stodghill have for young college students? “Always be yourself. Don’t fake it for anybody. Don’t let anyone mold you. It takes the trials and tribulations in life to mold your character for the better.”

Make sure to check into The Real World on MTV to gain more words of wisdom from Stodghill and see all his adventures on the show.

Previous Post:What is a “G” spot and where is it?
Next Post:Attention To Detail