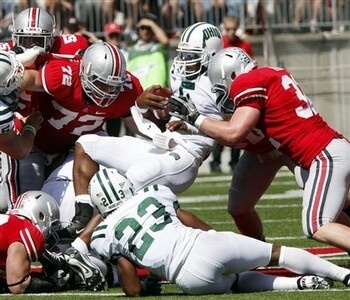 Week one of the 2011 college football season is a blessing from the football gods.  Or television executives who know what schools the fans want to see.  Either way, some higher power is doing something right.

If you look closely enough, there are a few gems hidden in the wasteland of games involving big schools looking for nothing more than a warm-up at home and smaller programs cashing in on the opportunity to play said bigger schools.  Luckily for us common folk, the actually competitive games will all be nationally televised.  Rejoice and get ready for the first weekend:

1.) Two Texas titans looking for some early recognition square off on the first Friday of the season. The Baylor/TCU rivalry dates all the way back to 1899 when the two schools were much closer in Waco before TCU moved to Fort Worth. According to Ben Findley of Mountain West Connection, “Baylor and TCU’s ‘holy war’ is one of the most-played college football rivalries in history with 105 contests played between the two schools.”  The Horned Frogs have a slight edge with a 50-49-7 all-time record and have owned the Bears in their last three meetings with a combined score of 89-17.  Watch for veteran Baylor quarterback Robert Griffin III to put up more of a fight in this year’s grudge match.

2.) This certainly will not be the most compelling game of the weekend – it will most likely be a blowout – but most of the country will be looking at the contest between Akron and Ohio State on Saturday purely for the sideshow the Buckeyes have become. Scandals forced the self-imposed exile of star QB Terrelle Pryor and coach Jim Tressel.  No one knows how the Buckeyes will recover, but the curiosity factor elevates what would usually be an easy day for Ohio State to possibly the most important game of the weekend.

3.) This one is intriguing because of the ramifications it could have for all of college football. How long have people been debating whether Boise State is a legitimate championship contender or a product of playing mostly weak competition?  Week one could add fuel to the fire of either argument when the Broncos square off against the Georgia Bulldogs.  “The SEC is one of the biggest critics of teams like Boise State,” said Lafe Peavler of Bleacher Report.  “Getting a win against one of them in their own backyard…won’t completely silence those critics, but it’ll help.”

4.) The Broncos/Bulldogs game will be on at the same time as possibly the weekend’s most exciting matchup.  Diehard fans will be switching between ESPN and ABC to catch both that game and the clash of behemoths that is Oregon vs. LSU.  Peavler believes “this game has a bowl-type feel to it… Kudos to both teams for making this game happen.” Oregon came painfully close to the BCS title last year and is looking for a second championship berth, while LSU is looking to put themselves back in the conversation.  If you can’t watch, DVR it.  This might be one we’re going to remember for a while.

5.) Sunday night showcases an in-state “rivalry” in the form of the West Virginia government-mandated “Friends of Coal Bowl” between WVU and Marshall.  The word rivalry is in quotes because not only could the Mountaineers not care less about the Thundering Herd, but they have absolutely nothing to gain by beating them for what would be a sixth consecutive time.  It’s been a one-sided event so far, but Marshall made things interesting last year by pushing WVU to overtime.  Marshall eventually fell 24-21, but, as Bleacher Report’s Bob Allen put it, “All the Herd has to do to make the Mountaineers believe that this series is a true rivalry is beat West Virginia in convincing fashion.”  Watch out: if Marshall can pull this off, a rivalry could be born on opening weekend 2011.

Previous Post:Defending Tim Tebow Against His Quarterback Critics
Next Post:Getting to Know Your Roomie [Ahead of Time]