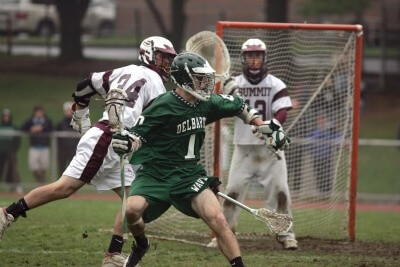 From spring 1956 to the spring of 1957, Bill Russell won the NCAA championship with San Francisco University, an Olympic gold medal in Melbourne, and an NBA championship. Rochester Rattler attackman Ned Crotty had a run last spring and summer that rivals the NBA legend’s achievements.In eight days during spring 2010 Crotty won Duke lacrosse’s first national championship, the Tewaarton trophy for the best player in college lacrosse and was selected number one in the Major League Lacrosse draft.

“It was some of the best eight days of my life so far,” said Crotty. “The biggest thing was the national championship. To be able to finally win it in my fifth year, it was unbelievable.”

“To win the Tewaarton, it showed that my hard work had paid off, but it wasn’t just good for me,” said Crotty. “It was good for Duke.  I wouldn’t have gotten that award without my teammates.”

In August, he was named the ACC Male Athlete of the Year and won the gold medal as a member of Team USA at the World Championship; scoring both the game-tying and winning goals in the championship game against Canada.

“To be on Team USA and be able to wear the red, white, and blue and wear the letters USA across your chest is something every kid always dreams of,” said Crotty.

It’s clear Crotty carried his spirit of hard work into his post-graduation careers.  After graduating from Duke, Crotty was hired as the sales and marketing director for Trilogy Lacrosse.

“During the year, I’m constantly calling people,” said Crotty. “Trying to spread the word about Trilogy and create partnerships with programs around the country.

“I will fly anywhere we have camps and do marketing there in person,” said Crotty.  In January, Crotty stayed a week each in California, Texas, back to California, and Atlanta.

Each weekend from November to August, the lacrosse star is on the road playing in the National Lacrosse League and Major League Lacrosse.  Crotty’s daily job for Trilogy, however, has allowed him to perform well in the MLL.  “At Trilogy, our tagline is ‘We teach what we do.’  So playing on the weekend helps me to work with the kids during the week,” Crotty said.  “It’s not like a finance job where it is hard to get out to a game on Friday.”