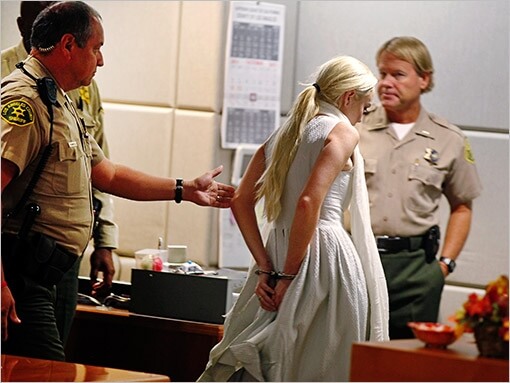 Remember that fresh-faced, spunky red-head from The Parent Trap the world grew to know and love?

Meet Lindsay Lohan, who over the years has appeared iconic movies like Freaky Friday and Mean Girls, but has also been the headline of news stories concerning her excessive partying, drug and alcohol use, sexuality and theft.

According to Entertainment Weekly, Judge Stephanie Sautner revoked Lohan’s probation and set her next hearing for Nov. 2. Lohan was on probation following a 2007 drunken driving charge.

Lohan was doing community service at the Downtown Women’s Center but was fired after missing scheduled appointments. Sautner reassigned Lohan to work at the L.A. County morgue.

Pending the Nov. 2 hearing, Lohan could return to prison, serving up to a year and a half.

New York University sophomore Tyler Senackerib said that despite Lohan’s history, she can get her life back, citing Britney Spears as an example. “I think that her life is definitely redeemable, after all, Britney made it back to being at least normal,” he said. “As for her career, I doubt she'll ever be back to what she once was, just because no one will ever be able to take her seriously again, which is much more necessary for an actress than a musician.”

Arielle Caplin, a freshman at Bucknell University, agreed with Senackerib. “ I think if she hasn't owned up to her problems by now and put some serious thoughts into fixing them, it will be really difficult to get back on track with her life and career.”

No matter what anyone else thinks, Rutgers University sophomore Snehann Kapnadak said that Lohan’s decision to get clean will ultimately come down to Lohan herself. “I think that her life could be redeemable, I mean she certainly has the resources – the fame, money, and contacts – to set her life straight once and for all.”

Kapnadak added, “But it's really up to her if she wants to get serious. Career wise, she probably shouldnt even think of that right now, I think she has to build some crediblity that she'd committed to change. If she can't show up to do community service, what makes directors think that she'll show up for shoots?”

As the Nov. 2 hearing approaches, the world can expect a whole lot of Lohan in the press, and as history tends to repeat itself, we should expect the unexpected.

Previous Post:How to Avoid the Creep at the Bar
Next Post:LapDawg PUG—Ergonomic All-In-One Desk for Studying