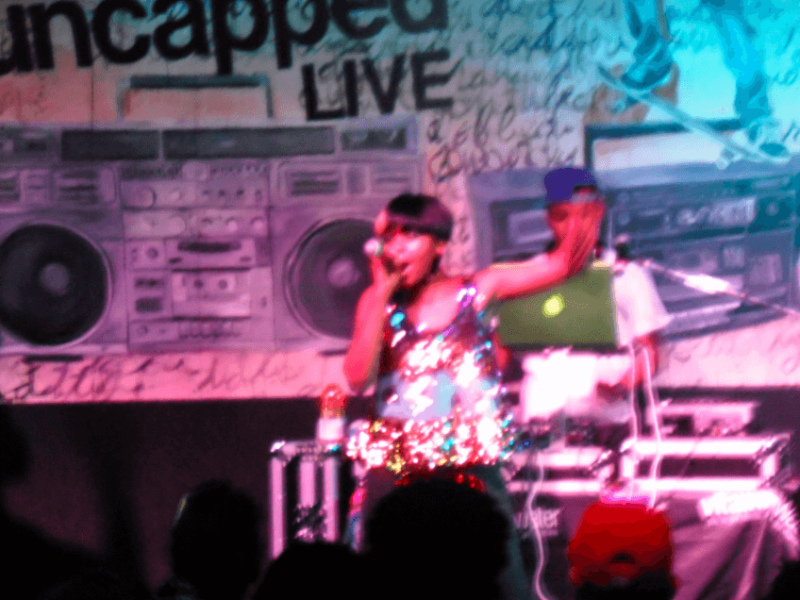 vitaminwater® uncapped LIVE is an event that has been touring the country, hitting major cities and hosting the biggest artists in the area. Recently, vitaminwater® uncapped LIVE came to Washington, DC, on May 19, at a new venue actually named after the event. Among the artists featured were Wale, Rye Rye, Fat Trel and XO along with several other featured artists and deejays.

DJ Alizay kicked off the night, spinning for the first hour while attendees ambled around, taking in the artwork and fraternizing with the performers. The venue featured three stories of entertainment, which included a stage, a ping-pong table and arcade games, two bars, a shoe wall, and several rooms of artwork. And the cherry on top of it all was the open Guinness bar.

This R.S.V.P. event progressed throughout the night, turning into a blowout extravaganza. When XO and Fat Trel hit the stage viewers went nuts. As with other genres of music, this new age hometown rap was accompanied by its own style of dance that can be described as krumping. As Rye Rye and Wale hit the stage the crowed became even more ecstatic.

Upstairs the mood was much different. Modern urban African American art was on sale throughout the venue, which gave way to a gallery upstairs, muffled to the live music downstairs. Among the artwork included was a child-like bedroom decoration, steel-wire sculptures and cartoon caricatures.

Opening for Wale, Rye Rye (Ryeisha Berrain) is an up-and-coming female rapper from Baltimore, MD. With a style similar to Nicki Minaj, her “who gives a f–k” attitude is capturing in the moment. Her outfit, including a shimmering gold scaly shirt, was perhaps the only thing to outdo her attitude.

Overall, it was a night that could only be topped by yet another vitaminwater® uncapped LIVE event. Fader and Brightest Young Things, magazines local to the area, also sponsored the event.

Don’t worry, there are more vitaminwater® events taking place throughout the summer. To check out future events, check out TheFader.com/uncapped.