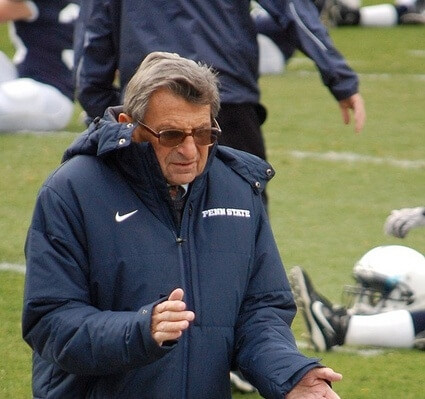 Twitter has become one of the main sources for news in our current society. However, when the stories about the firing of Joe Paterno and the hiring of Bill O’Brien break, Twitter users exercise the social network to voice their opinions in 140 characters or less.

Notable Penn State alumni, prominent sports journalists and your college buddies alike did exactly that on the evening of Nov. 9, 2011, the date that the Penn State board of trustees announced the firing of the legendary coach. We know him as Joe Pa, but that name will forever be tainted due to the scandal surrounding him and former defensive coordinator Jerry Sandusky.

Magic Johnson took a different route. The five-time NBA champion expressed praise for Paterno without taking a side: “Coach Paterno is the winningest coach in college football, a hero & a champion. Thank you for all you did for football & the Big 10.” In a later Tweet, Johnson added: “He helped turn young men into champions & men.”

On the other hand, “Two and a Half Men” star Ashton Kutcher offered his feelings on the situation:

In the midst of turmoil and questions, Penn State announced the hiring of O’Brien on Dec. 5. O’Brien, the New England Patriots offensive coordinator, became the first head coach not named Joe Paterno in nearly 46 years.

When the hiring became public, Penn State alum LaVar Arrington let everyone know his true feelings through his Twitter account. Through a series of consecutive tweets, Arrington announced something surprising yet powerful:

Like Arrington, many other alumni and current players took to Twitter to give their views on the matter:

Two months have passed since Paterno’s firing and we are still talking about Penn State and the scandal. It is all still relevant and current, so the opinions of those connected to Penn State or the prominent figures in sports matter to us. Thanks, Twitter.