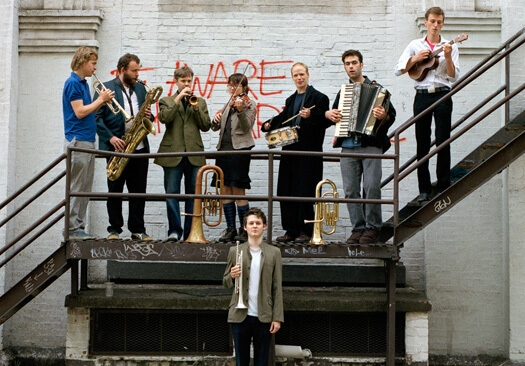 World music, as it is often called, is difficult to characterize as a genre. Yet if one were to sum it up, it generally signifies the conglomeration of two distinct genres of music, thereby creating a new sound altogether.

For such an ambiguous field within the music industry, it may come as a surprise to most that this technique is a trademark of beloved American-indie band, Beirut. To those who know little about this quirky group from Santa Fe, N.M., prepare yourself for something truly novel.
The key to understanding what makes Beirut so unique cannot be achieved solely through an analysis of their music, but must be paired with the group's avant-garde beginnings. At its earliest stage, Beirut was not a group of musicians but rather a one-man act led by current frontman, Zach Condon.
“It’s funny because our progression is so backwards,” Paul Collins, Beirut’s bassist, said. “It wasn’t like we got together one day to make a band, because Beirut was Zach’s thing way before the rest of us joined. Since he created Beirut, a lot of what people like about us comes straight from his original vision.”

As a teenager and budding musician, Condon developed this vision by dropping out of school to travel across Europe for inspiration. What he found opened his ears to styles of music unlike the jazz he had been accustomed to at home.
When the trip concluded, Condon went straight to the studio and reworked the best aspects of what he discovered into the classic “American” music format. However, when it came time to perform his music, Condon was displeased. He decided that the amount of sounds and layers his music required was more than what a one-man show could produce.
“At some point, Zach sitting alone in his room or on stage wasn’t getting him where he wanted to go,” Collins said. “He knew it was time to turn Beirut into a band and, as someone who saw him play, I wanted in. The timing was perfect and once Zach got all of us on board, things just took off.”
Since releasing their first album, Beirut has continued to amaze fans with their consistency in providing high quality music at every bend. Their latest album, The Rip Tide, was released this past summer and has been their most successful studio album to date. The album emanates a notably pop-esq and sunny disposition without sacrificing any of the soulful aspects that first drew in Beirut’s steady following.
While The Rip Tide marked a divergence in sound from Beirut’s trademark European, Mexican and Francophone influences, the pop-aspect of the album has not alienated its growing fan base. “Santa Fe”, the upbeat single off the album, gained mainstream attention for Condon’s soft vocal arrangement over the synthesized, percussion-heavy melody.

Condon still helms the creative aspects of the song-writing process. He also plays most of the instruments that have made Beirut such an atypical act like the trumpet, goulash, ukulele, and mandolin.
As Condon creates a foundation for each song, the other members add the necessary elements to elevate each song to its full potential. Despite everything Condon does for Beirut, the end result is undoubtedly a joint effort.
“One thing that is really unique about Zach’s process is that his music is melodically based,” Collins said. “Zach writes the songs, we follow the melodies on our end, and then we work to make a demo that pulls everything together.”

Find schools
So far, the pooled effort has worked in keeping Beirut’s music fresh and exciting for fans to follow. They have also earned the respect of fellow musicians like The Strokes lead singer Julian Casablancas, who was late to his own show in order to catch a glimpse of Beirut’s performance at Bonnaroo last year.
However, with all success aside, Beirut is still just as famous for its headstrong mentality as it is for the musical style it fought to maintain. As such, especially given Condon’s age, Beirut is proof that one does not need to forfeit creativity for fame.
“The worst bands are the ones who try to make it,” Collins said. “Sometimes the music you love no one else will like, but stick to it and it could be released in the future.”
Sticking with that mantra, Beirut continues to take their famed tunes on the road. They are headlining tours around the country throughout 2012 and partaking in various festivals, including Coachella in April.
As the band puts an added emphasis on live shows this year, fans will be able to experience a beautiful energy that Collins could only describe as unforgettable at every gig.
“All the hours of hard work we spend gets compressed into the songs we create,” Collins said. “When we can finally go on stage and really give everything we have to the sound, I’m telling you, it is pure magic.”
FacebookTweet
Celebrity Advice Life Music Festivals Party