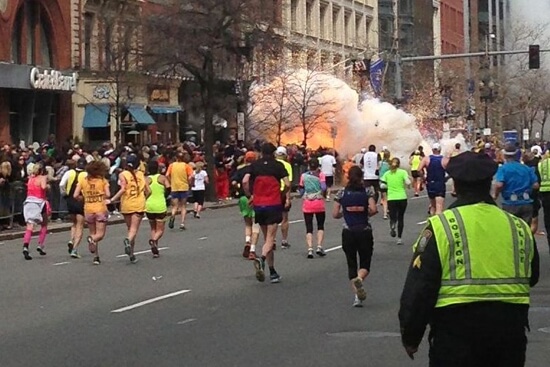 Tragic Bombing at the Boston Marathon

When two explosions occurred near the finish line of the Boston Marathon on Monday, the day where Bostonians started off celebrating Patriots’ Day ended as a time of sadness and unexpected tragedy.

Details are still emerging,  but here are the key things to know so far:

– The explosions were in fact bombs, and they ocurred within 10 seconds of each other around 2:50 p.m.

– There have also been speculations about at least one other explosive device that was dismantled by the police.

– No suspect has yet to be identified, but individuals are being questioned and one home has been searched.

– President Obama did avoid using the word “terror” when delivering a public announcement, although many news sites and even federal officials have labeled this tragedy a terrorist attack.

– It is uncertain if the attack was domestic or international, but federal law enforcement has stated that both bombs were small.

According to CNN, Boston Police Commissioner Ed Davis said Monday that the death toll had risen to three. It was reported that 144 people are being treated at nearby hospitals, at least 17 patients are in critical condition and 25 are in serious condition.

Courtney DeBeul, a sophomore studying social work at Oakland University, said she immediately contacted her brother, who lives in the Boston area, to make sure he was safe. “He of course was, and I am so thankful for that,” said DeBeul, 19, who was able to contact him by phone around 4 p.m. “Just the thought that my brother could have been in that crowd really gives me empathy towards the families of those who were injured.”

While participating in the Boston Marathon for the second time with her father, who was running his fifth race, Boston University student Meaghan Melly noticed that runners who were finished were walking towards them. “We heard a ton of sirens and saw FBI cars driving wicked fast on the other side of Commonwealth Avenue. We heard a really loud noise, but we assumed it was just a celebratory cannon,” says Melly.

Next thing they knew, they hit a wall of runners who were stopped. People were crying and everyone was on their phones. “This guy runs up to us and asked, ‘Have you heard the news? There were two bombs at the finish line! You just missed it!’" Melly said her initial reaction was complete shock. She looked at her dad thinking how close they were and broke down crying.

“Within minutes, the phone lines were completely cut off to prevent setting off other bombs. My mom at home couldn't reach us and was hysterical. If it wasn't for social media no one would've known we were initially okay,” said Melly. “You always hear about things like 9/11 and the school shootings, but being in the city, never mind feet away from a tragedy, it is just such a surreal experience.”

Allegra Thaler was walking to work only a block away from the explosions when she was instructed to evacuate the area. “I literally had no clue what it was, but then I heard people who had been at the finish line say something about an explosion,” says Thaler, a hospitality and political science student at Boston University “An officer just yelled at the crowds to go inside the apartment complexes lining the streets because ‘it is safer to be inside than out.’”

Thaler went into a random apartment complex off Exeter and Commonwealth Avenue and waited in the foyer with a grandma and a middle-aged woman. “I didn't know how long I'd be there or what was happening. I just called my mom to reassure her I was safe, I loved her and some kind of explosion had occurred.”

While walking to meet her friends back at school later, Thaler noticed that something was definitely off. “There was a strange tension in the air and every block or two I'd see a woman crying or runners with their medals sitting on the curb with their head in their hands. It was scary.”

Across the country, American citizens have been devastated by the event. College students are baffled and in utter shock. Ian Kenney, a chemical engineering student at the University of Michigan says that right now, the most important thing is love and support. “This is a horrible tragedy, but at times like these, instead of focusing on the bad, we have to band together to help the people who were affected,” he says. “While it is horrible, we have to prosper.”

Previous Post:VIDEO: The Ultimate Girls Road Trip
Next Post:You Slept With Who?! – Cheating Outside Your Sexual Orientation