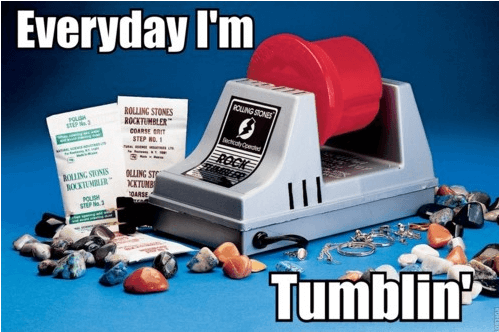 Olivia YankeyFeb 7, 2012
Home » Latest Posts » Tumblr: A Procrastinator’s Best Friend
FacebookTweet
It’s undeniable that the Internet is a useful tool, but – as anyone who has ever sat in a 9:00 a.m. lecture knows all too well – the web also provides us millions of ways to avoid being useful. Tumblr, a website started in 2007 that now hosts over 40 million “microblogs,” is no exception to this marriage of practicality and diversion.
The website can be used for productive things like organizing useful information you find online or blogging about your next big vacation, but more often than not, it’s used it for the preferred purpose of procrastinating.

“My favorite [Tumblr] is Suri’s Burn Book. It manages to both insult celebrities and reference pop culture, which I love,” said Emily Yi, a junior at Brown University. This Tumblr is written from the point of view of young fashion icon Suri, daughter of Tom Cruise and Katie Holmes. Suri's Burn Book is one of many Tumblrs that aims to amuse readers by making fun of celebrity children and often ends up starting new Internet memes.

Tumblr definitely has a hold on web humor, with millions of accounts created for the sole purpose of being witty. Feminist Ryan Gosling is a favorite of anyone with the slightest interest in women’s studies (or, anyone whose intimate connection to The Notebook didn’t end after high school). It overlays mock-seductive text about feminist theory over hot photos of the actor, and every message begins with the phrase, “Hey girl,” just to make each reader feel like Ryan is speaking to her and her alone.

Shit My Students Write is similar to Texts from Last Night and confirms that nagging fear that teachers secretly get together and make fun of how stupid their students’ essays are.

STICKS OF BUTTER AND RICK PERRY

There’s also Paula Deen Riding Things, a particularly odd meme that features badly cropped images of the Southern “chef” literally sitting on everything from Rick Perry’s shoulder to Snooki’s sombrero to a human-sized stick of butter.

Slightly less silly and a bit more appropriate for killing time in a near-silent library (you know, to avoid those awkward moments when you crack up audibly in the quiet section among 100 other students who, in that moment, instantly hate your guts) are microblogs like Awesome People Hanging Out Together. It’s a simple, running collection of real photos where people like Thriller-era Michael Jackson were casually having conversations with other awesome people like Freddie Mercury at parties.

BLAST FROM THE PAST

In the same vein as Awesome People Hanging Out Together are Tumblrs like I’m Remembering!, which satiates your hunger for ‘90s nostalgia, and Retrogasm, which posts pictures and video from the Golden Age of Hollywood that are especially enjoyable after watching “Mad Men.”

CORGIS, SQUIRRELS and BUNNIES, OH MY!

There are the obligatory cute Tumblrs, too. OCD: Obessive Corgi Disorder is essentially just addictive pictures and videos of Welsh Corgis running around looking all adorable. F—k Yeah Interspecies Friendships is another heart-melter. Be advised: on this website you will witness some of the sweetest pictures in existence of baby squirrels riding tortoises and puppies hanging out with bunny rabbits.
While businesses are beginning to join Tumblr as a way to speak to their customers with a personal voice, fans of certain brands like Apple and J. Crew also create Tumblrs to share news about the labels they love.

“Working at J. Crew for the past two summers has definitely rubbed off on me,” said Kelly Harrison, a junior at Cornell University. She often visits 770 Behind the Line, an unofficial blog about what’s getting attention at J. Crew’s headquarters.
For every productive way people use the website, there are twice as many ridiculous, funny or adorable Tumblrs that are perfect for ignoring those classes that should be paid attention to and neglecting those empty Word documents of essays that need to be written.
In short, once you go on Tumblr you’re never going to be productive again. Just thank all those geniuses posting badly doctored images of famous people sitting on strange objects and sending out fake messages that fool you into thinking Ryan Gosling loves both you and Betty Friedan (but mostly you).
FacebookTweet
Life