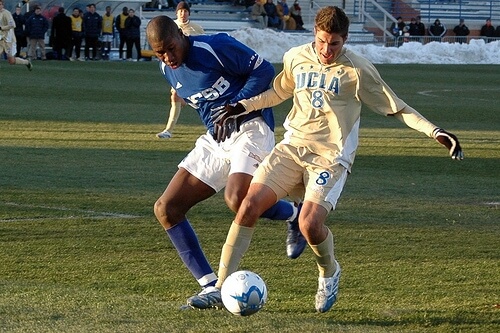 Take a break from partying and studying this fall and watch some incredible soccer match-ups in August and September, including a game between arguably the two best teams in the nation.  Or if you want, bring the party (or the studying but I don’t recommend it) to these games.

The college soccer season will kick off with a bang in South Bend as two of the top soccer programs in the nation will clash.  Notre Dame, #7 in Goal.com pre-season rankings and #11 by College Soccer News, will see how their new offensive weapon, transfer and the nation’s number one goal scorer Ryan Finley, will fit into their lineup.  “Indiana is obviously a great team with a lot of history and we are all excited for August 27,” Finley said.  The Irish also return key midfielders Dillon Powers and Brendan King and defenders like Brent Van De Casteele and Aaron Maund.

“That game should be huge,” said goalkeeper Will Walsh.  “We are looking to get a pretty big crowd out there.”  Indiana (#6 Goal.com/#15 College Soccer News) lost top scorers Will Bruin and Andy Adlard to the MLS but will hope that sophomore midfielder Nikita Kotlov and freshmen Eriq Zavaleta and Jack Coleman can fill the offensive voids.

Half an hour earlier and 300 miles south of South Bend, there will be a rematch of a high-scoring quarterfinal in last year’s NCAA Tournament and arguably a game between the two best teams in college soccer this year.  Louisville (#4 Goal.com/#1 College Soccer News) edged out UCLA (#2 Goal.com/College Soccer News) 5-4 in the quarterfinals and ultimately lost in the finals.  Another high-scoring affair should be expected as the Cardinals return top scorer and All-American Colin Rolfe while the Bruins still have number one scorer Victor Chavez.  The Bruins return 11 starters and have loads of young talent.  In 2010, three of the team’s top four scorers were freshmen.

The Hoyas will face the Wolverines in the second game of a difficult road trip that could determine the fate of their 2011 season.  Starting on September 9, Georgetown will visit Michigan State (#18 College Soccer News), Michigan (#18 Goal.com/#21 College Soccer News), and Penn.  Each of those teams was ranked in the Top 25 of the final 2010 NCAA poll.  The Hoyas, though, should be up to the challenge with a strong returning squad that includes Big East midfielder of the year Ian Christianson and All-Big East players Steve Neumann and Joey Dillon.  “We're all very excited about our challenging schedule this year and we are aiming to build on our success from last year,” said Neumann.  “The Michigan game will be one of our toughest games as they made it to the College Cup last year.”  Freshman star Soony Saad and senior Justin Meram, Michigan’s top two scorers last season, both left the program, which leaves Soony’s brother, Hamoody, to lead the Wolverine attack.  Hamoody was third on the team in points last season.

The reigning champs will not really get tested until this late September match-up against Ohio State (#17 College Soccer News).  The Zips (#1 Goal.com/#4 College Soccer News) are at the top of the Goal.com rankings, but they have lost a considerable amount of talent, including five of their top six point-getters in 2010.  There may be no reason to fret, though.  The one player Akron does return was their best goal scorer last season, Darren Mattocks, and coach Caleb Porter has lured an incredibly talented freshman class to Akron.

Although Ohio State did not make it into the Goal.com rankings, the Buckeyes still should be a force to be reckoned with this season.  Even though Akron nearly tripled Ohio State’s goal total in 2010, Ohio State’s key defenders like Sage Gardner, Chris Gomez, and David Tiemstra and goalkeeper Matt Lampson are returning.

Previous Post:Keeping Tidy for You (and Your Roomie!)
Next Post:The Truth Behind Sexy Dreams