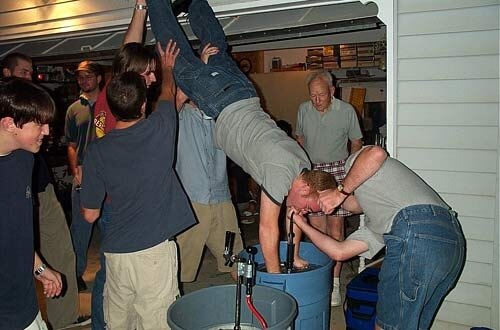 In the wake of Joe Paterno’s finishing touches to a legendary career, I would like to provide some tips for students who are anxious to follow in the former Nittany Lion coach’s footsteps. While no mortal will ever rival the greatness of the inspiration behind Peachy Paterno ice cream, we can settle for destroying any chances of valedictorian, magna cum laude, or employee of the month. Although you have worked hard by juggling classes and pulling all-nighters in order to make the most of your parents’ or possibly your financial sacrifice, success is relative and the Jersey Shore proves it. Without further adieu, here are the five steps necessary for dropping the ball and soiling your future’s proverbial undergarments.

Taking keg stand photos and making them public on Facebook

Remember when your teachers, guidance counselors, parents, and even College Magazine warned you about posting digital dirt on social networks? Keep chugging until you forget. When Uncle Natty double dog dares you to keg stand, you have to defend your college credibility by conquering the challenge. Just in case anyone doubts how much alcohol you can physically digest before enjoying a pretty colored ride to the hospital, make sure you find a trusty friend to snap some Polaroid’s for the entire world to see. If you are underage, you better Tweet those pictures as well so law enforcement and your formerly-potential employer can check out your skill.

When Michelle LaVaughn Robinson wrote about her struggles as an African-American on a largely white Princeton campus in 1985, she never imagined that she would become the first African-American First Lady. However, stories like hers are simply fairy tales that current college students don’t have time to comprehend. With the Duggars expecting a twentieth baby and The Rock returning to the ring, who could possibly manage to squeeze an encyclopedia-thick research paper in their last year of school? Luckily, the internet has allowed students from Battle Creek, Michigan to copy and pass off assignments from students in Dublin, Ireland. Originality, passion, and research are products of yesteryear; now is the time for convenience and conformity. After three years of racking your brain and banging the keyboard, test the system by attributing your sources to Carlos Mencia’s favorite authors: Copy and Paste.

Between 2004 and 2006, my Temple Owls had a 0-20 record with a loss margin of -34.4 points per game in football. Imagine the urge of those students to kidnap that poor soul in the Owl costume and replace their family’s turkey for Thanksgiving dinner. America has changed in the 2000’s; we no longer have to shiver thanks to the Snuggie and we no longer have to act civilized as evidenced by the Penn State riots. If you are frustrated by the forced peppiness of your school’s mascot, then by all means ambush that Sesame Street reject and bring him home to display on your mantle. On the other hand, feel free to abduct a rival school’s mascot and suggest a ransom offer of the cheerleaders’ numbers.

While inhaling the hemp perfume of “Mary Jane” or taking a few shots is one thing, packing heat for lecture is certainly a stronger way to not only stay warm but also blow away your entire career. When the class becomes too rowdy for the professor to handle, shooting a bullet in the roof ala the starter of a race, can grab the students’ attention. Since skaters can bring their boards to class, ROTC cadets should follow suit by brandishing their own special equipment. With Halloween passing, I’m sure plenty of students dressed up as Yosemite Sam but failed to win free Butterfingers due to their lack of heavy artillery. Although safety issues could arise, chewing gum is permitted and .0000001% of deaths each year are related to choking on bubblegum. I can’t back up that statement but you would believe me if I had a holster in my pants during Political Science class.

Having an affair with your T.A. and writing about it on your blog

We have all had that one teacher who plays a recurring role in our fantasies; however, college provides the chance to turn that fantasy into reality. As you see the lustful look in your T.A.’s eyes, the sweat drips from your palms and your knees knock together. Although you have no faith in your abilities to pass macroeconomics, you are beyond confident in your swag. Visiting your teaching assistant after office hours, you develop a romance that can best be described as “private tutoring.” What fun is there in possessing all these juicy details without sharing them to the horny plebeians of cyberspace? Plus, your blog could use some traffic from people other than your stalker and little cousin. By posting this sex-ed adventure on the Internet, you are overachieving by ruining not only your career but also your professional partner’s.

Previous Post:Celebrating Thanksgiving Abroad
Next Post:Sex and the Single Girl