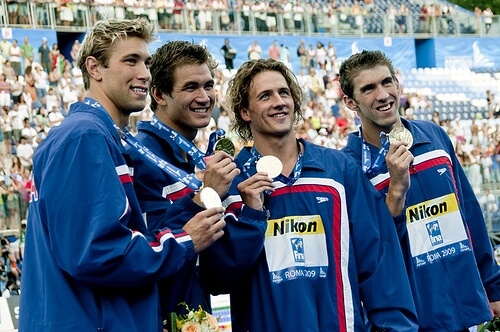 Top 10 Olympians to Watch in London

The Olympics are only a matter of weeks away and I’m pumped. Hundreds of athletes will be competing for gold in London but some of them stick out above the rest. Here is my list of the top 10 Olympians to watch in London:

Perhaps the two best swimmers in the world, the Batman and Robin of swimming are ready to get after gold once again. Phelps has the hardware but Lochte is younger and is just starting to emerge as the world’s elit, even beating Beijing champ in early trials. The best rivalry in this Olympics may just be between two teammates.

My money is on Daley for the “Most Popular Athlete” Award. The teenage diving sensation won a world championship when he was 15. But what makes Daley even more interesting is that he’s British and a lot of pressure will be riding on the hometown kid. I don’t claim to know much about diving but I have a hunch that Tom will get it done.

LeBron and company are the clear-cut favorites to win gold on the hardwood but the Gasol brothers may have something to say about that. The two big men will try to lead their native Spain to an improbable victory. They are one of the favorites for the silver medal but they have a lot of work to do if they want gold.

This (male) French swimmer is infamous for talking trash and then getting caught from behind by Jason Lezak in the 4X100 freestyle relay in Beijing. Bernard is one of the better swimmers in the world and he will be looking for revenge in London.

Despite some pre-Olympic controversy, Felix will be geared up for these Games. She will compete in the 100 meters but her specialty is the 200. She has come up just short in her signature race the last two Olympics and this may be her last go ‘round.

One of America’s most popular female athletes (and dancers) will look for redemption after a heartbreaking loss in the Women’s World Cup. Unlike men’s soccer, there is no age requirement for women, making stars like Hope Solo and Abby Wambach eligible. Despite testing for illegal substances after a routine urine test earlier this month, Solo will still be making an appearance in London. Solo has shown she can be one of the best in the world in net. She just needs to prove it.

Both American, these two might be the best decathletes in the world. After Beijing’s gold medal winner Bryan Clay narrowly missed qualifying, USA’s decathlon hopes fall on the shoulders of these two men. For a country with a rich decathlon history, anything less than a gold might be considered a disappointment.

Previous Post:The Roadtrip Playlist
Next Post:You’re Not My Type