You are here: Home / Life / Top March Madness Moments of the Decade

The NFL has the Super Bowl. MLB has the World Series. Even MLS has the MLS Cup. But NCAA Basketball has the grand daddy of all annual sporting championships. It spans over a month’s time. Its brackets cause brutal rivalries. And each game is do or die. It’s March Madness.

Over the past 10 years, March Madness has grown exponentially in popularity. And each year comes around with one’s team hope to garner the title and bragging rights. The past decade has delivered blowouts, close wins and, of course, underdog triumphs. Here is a recap of some of the best games in March Madness history since the beginning of the 21st century:

UConn scored 12 straight points down the stretch to rally. Despite foul trouble, Emeka Okafor shut down Duke's offense during the last four minutes after they had taken a 75-67 lead. It was the Blue Devils' foul trouble that did them in. All three of their centers – Shelden Williams, Shavlik Randolph and Nick Horvath – fouled out. Okafor gave UConn a 76-75 lead with 26 seconds left. UConn's Rashad Anderson hit two free throws to push the lead to three, and after Duke’s Redick barely grazed the rim with a 3-point attempt that would have tied it. Okafor got the rebound and made a free throw giving the Huskies the win.

After trailing by 13 points at halftime, Illinois scrapped back into the game. Illinois held Carolina star Rashad McCants without a field goal in the 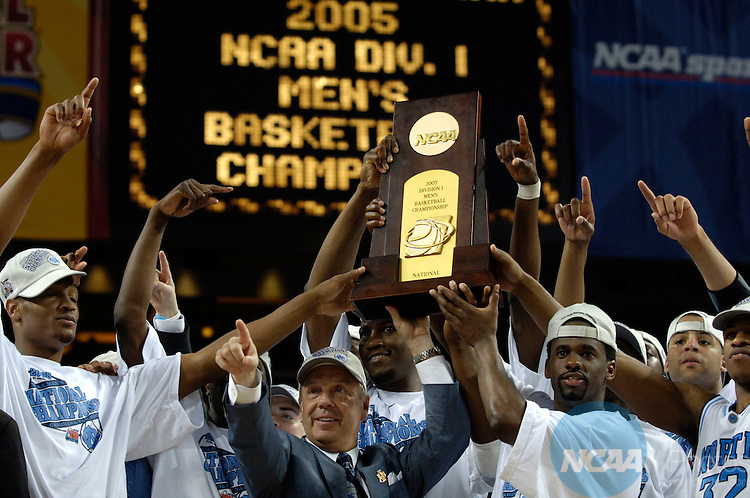 second half. That set the stage for a pain-staking final two minutes, as Illinois tied the score at 70-70 with a 3-pointer by Deron Williams. But those would be Illinois's final points. The Illini missed their final five 3-point attempts and North Carolina’s Raymond Felton stole a pass from Luther Head with 32 seconds remaining. By the time Felton stole the ball, a Marvin Williams tip-in had given the Tar Heels a two-point lead. Felton hit three of four free throws down the stretch to seal the game.

The 2006 George Mason Patriots were a team like no other. George Mason, a Colonial Athletic Association school who barely made it into the NCAA tournament, defeated Michigan State, North Carolina and Wichita State before meeting up with UConn.

Mason opened the second half on an 18-8 run. The Patriots then led 52-51 with less than 11 minutes remaining. Neither team led by more than four in the final 10 minutes. George Mason led 74-70 with less than 10 seconds remaining, but UConn’s Marcus Williams sank a shot to cut it to 74-72 with 7.9 seconds left. Then George Mason's Tony Skinn missed the front end of a one-and-one with 5.5 seconds remaining. UConn’s Brown blew by everybody and converted a reverse layup at the buzzer to force overtime. Against all logic, George Mason jumped to a five-point lead in overtime and never trailed to win, 84-82.

The Orange jumped to a 53-42 lead at the half and led 76-64 with less than five minutes remaining. A 6-0 run sparked by three points each from Nick Collison and Kirk Hinrich cut the deficit to 76-70 with 3:20 remaining, and a Michael Lee layup made it 80-77 with 60 seconds left. Suddenly, the game was all too close. When Hakim Warrick missed a free throw with 14 seconds remaining, the Jayhawks gained possession down 81-78. KU's desperation shot at the buzzer wasn't even close.

With 2:12 on the clock, Kansas faced a nine-point deficit. In less than 10 seconds, that nine-point lead for the Memphis was down to four. Then, now

known as one of the most memorable shots in NCAA tournament history, Mario Chalmers received a pass from Sherron Collins and launched a 3 that would go in with just over two seconds left. Chalmers claimed it was just "a lucky shot." The Jayhawks outscored the Tigers 12-5 in the extra five minutes to claim their first national title since 1988.

Illinois was down 15 with less than four minutes remaining in regulation, then rallied to down five with 58 seconds left. But Arizona had the ball. An Arizona turnover led to a Fighting Illini layup (80-77), and then another Arizona turnover on the succeeding inbounds pass created another Illinois opportunity. Iliniois’ Deron Williams drained a 3-pointer with 38 seconds remaining. Just like that, things were headed to overtime where Illinois beat Arizona, 90-89, and earned a trip to the Final Four.

After already upsetting Gonzaga the round before. Stephen Curry and his Davidson team bested Georgetown. However, Georgetown jumped to a 38-27 halftime lead and that escalated to 46-29 with less than 18 minutes to play. Then to turn it around, Curry sank a 3-pointer that cut the lead to 48-36, then added a free throw (48-37). Then with multiple shots, he was able to push the Wildcats to a 60-58 lead with 4:40 remaining. There was a layup (62-60, Davidson), followed by another 3-pointer (65-60, Davidson). Curry made five free throws in the final 23 seconds, and the Wildcats advanced to the Sweet 16 with a 74-70 win.

Pitt was the favorite, a No. 1 seed. Villanova trailed Pitt, 34-32, after the first half. Neither team led by more than five points in the second half. But Pitt led 67-63 with less than three minutes remaining. In the final minute, Villanova was up 76-74 and inbounding under its own basket. Rather than get the ball in safely and force Pitt to foul, Reggie Redding threw the ball away and Levance Fields came away with it. He was fouled just after crossing half court with 5.5 seconds remaining. The Pitt point guard sank both free throws to create a 76-76 tie. With 0.5 seconds remaining, Scottie Reynolds made a layup that sent the Wildcats to their first Final Four since 1985.

Two teams, same state. This one was big. Xavier led 59-50 with less than three minutes remaining. But then Ron Lewis sank a multiple free throws (59-52 with 2:54 left), Jamar Butler sank a 3-pointer (59-55 with 2:07 left), Lewis got a 3-point play (59-58 with 1:36 left) and the Buckeyes found themselves with the ball and down 62-59 with 9.3 seconds remaining. After Xavier’s Cage missed the second of two free throws, Mike Conley rushed up the court and found Lewis, who made an overtime-forcing 3-pointer with two seconds remaining. In overtime, Conley scored Ohio State's first seven points and pushed the Buckeyes to a 78-71 win. Conley finished with 11 points in overtime, 21 in the game.

The Blue Devils nearly blew a five-point lead with under two minutes left when Butler’s Gordon Hayward took the ball at the top of the key, spun and

worked his way to the baseline, but was forced to put up an off-balance fadeaway from 15 feet. Duke’s Brian Zoubek grabbed the rebound and made the first foul shot with 3.6 seconds left. He then intentionally missed the second. When Hayward's half-court shot at the buzzer went flying, thudded off the backboard, but didn’t go in. Duke had won its fourth NCAA title.

The VCU Rams blew a nine-point lead by scoring only three points in the final 7:37 of regulation. They never trailed by more than four all night. They found themselves down 71-70 during overtime. Then VCU’s Bradford Burgess made a layup off an inbounds pass with 7.1 seconds left to make the score 72-71. Florida State’s Rob Brandenburg blocked Burgess’ shot at the buzzer. Yet Virginia Commonwealth still grabbed a 72-71 victory over Florida State in overtime.