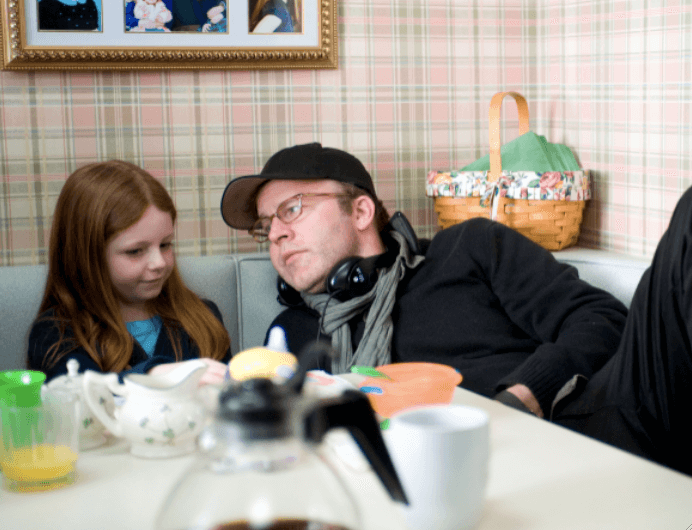 Tom McCarthy’s Movie is a Win-Win

“We just knew these characters,” writer-director Tom McCarthy says of setting his new film, “Win Win”, in suburban New Jersey where he and his good friend and first-time cowriter, Joe Tiboni, grew up. The familiarity is immediately palpable when the audience meets lovable shmuck Mike Flaherty (Paul Giamatti), an attorney (like Mr. Tiboni) who moonlights as a local high school wrestling coach (both McCarthy and Tiboni wrestled in high school). As the film opens, Mike finds himself struggling to make ends meet and unwilling to admit just how strapped for cash he is to his wife (Amy Ryan) and two young kids.

It’s a movie about “decent people trying to get by and making the wrong choices sometimes,” McCarthy summarizes. And for Mike that wrong choice is jumping at the opportunity to make a little extra cash in a less than honorable way. One of his older, and increasingly senile, clients can no longer take care of himself and has no reachable family members. In a seemingly victimless crime, Mike takes on guardianship of the aging Leo (Burt Young) but sticks him in a retirement home and pockets the extra $1500 a month.

Things take a turn for the complicated when Leo’s troubled grandson, Kyle (played real life high school wrestler Alex Shaffer in his debut role), shows up on the run from a disappointing family life and drug-addicted mother. Unwilling to force the bleach-blond teen to head back to Ohio with his mother still in rehab, Mike and his family offer Kyle a place to stay and enroll him in the high school. When the laconic but genuine Kyle proves to be a champion-caliber wrester – something Mike’s team has long lacked – Mike seems to have found himself a win-win situation. For a time, Kyle get’s the family life he never knew and Mike and his fellow washed-up coaches – the playful but heartbroken Terry (Bobby Cannavale) and Mike’s business partner Stephen (Jeffrey Tambor) – get to live vicariously through Kyle’s athletic success. But things can only be too good to be true for so long and when Kyle’s mother (Melanie Lynskey) shows up, Mike’s precarious setup begins to unravel.
Critic’s have praised “Win Win” for portraying a relatable slice-of-life, acclaim that speaks to McCarthy’s ultimate goal for the film. “I really wanted to depict this world as authentically as possible, without judgment,” he says. This verisimilitude, particularly within each of the fully developed and believably flawed characters, is what allows the film to seamlessly combine heartwarming drama and laugh-out-loud comedy.

“The question is how do you balance it,” McCarthy muses on including humor without undermining the resonance of the more serious moments. “It’s gotta come from the characters,” he concludes; and “Win Win” is certainly a testament to this approach.