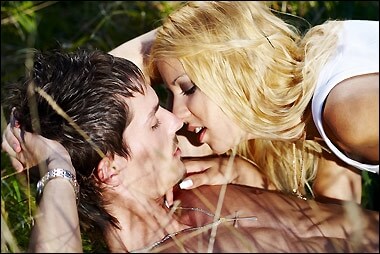 Think Outside the Bedroom

There is an episode of Friends where the six main characters talk about the weirdest places they’ve done it. Ross’ was on the It’s A Small World After All ride at Disney World. Rachel’s was at the foot of the bed. Phoebe’s was in Milwaukee.

At least Ross had the right idea.

Sex outside of the bedroom can be a very exciting thing. A lot of the time it happens because you simply can’t keep your hands off of each other. Or maybe you’re just really drunk and out of craps to give. Either way the sexual tension (horniness) is so high that waiting until you get home is out of the question. Of course, sex outside of the bedroom typically means in public where there is a risk of being caught in the act.

“I once had sex right off of a long walkway up to a friend's house. She threw a party and there were tons of people there. The pathway is flanked by wilderness. Wilderness!” said Mauri Navarro, a third-year student at Pomona College. “We were both so turned on by the fact that, despite the fact that we could get caught, that it was a first-time hook-up and that we were at someone else’s house. We were so turned on that we still did it. Once we gave into temptation, the amount of arousal only increased.”

Sometimes spontaneous hookups can even be a little closer than that. I personally remember a night where after downing a bottle of Jagermeister, a guy and I started hooking up in front of our friends, thankfully under the covers. Classy? Maybe not. But worth it? Definitely. Alex Cheves, a junior at the Savannah College of Art and Design had a similar experience.

“One would be while three other guys were sleeping on a youth trip to Helen, GA. And everyone was asleep in the same room, and it was a hotel room and I had sex with a guy in the bed. It was actually a Presbyterian youth church group to the mountains,” said Cheves. “We saw a baseball game and we did water tubing… and then we had sex in the hotel while two other guys and our chaperone were sleeping. It was wonderful happening there. He is attractive; he went on to be a left tackle at another school. We had to be really quiet but it was really hot. And the quarter back from the team was sleeping next to us.”

But sometimes there is no thrill of being caught. Sometimes the situation is simply too hot to handle and you would rather stay in the kitchen and just do it on the counter. Or in another student’s case, a freezer.

“I had sex in a freezer, like a walk-in freezer. It was a cold room for airplane parts. I had frostbite on my ass. What happened is that we got really excited out of it but then it was like we had to find a place to go. And the only place that had a lock from the inside of the door was the cold room,” said Shannon Craig, a senior from SCAD. “ So we went in there and obviously when things started happening it was like, it was so dry in there that is was really kind of — well it was very uncomfortable for me. But he said it was very uncomfortable for him because he said it felt like his balls were up inside his stomach it was so cold. It was the only time that we had sex because that experience was so awkward.”

It’s like those sad Viagra commercials; it comes down to when the time is right. Sometimes the place isn’t and sometimes the situation isn’t. But when two people want each other right then and right there, why not go for it? It’s a hell of a rush, and certainly makes for a better story. Suddenly bed sex looks a little vanilla.

Previous Post:Leader vs. Follower Test
Next Post:10 Things You Can’t Do in the Real World