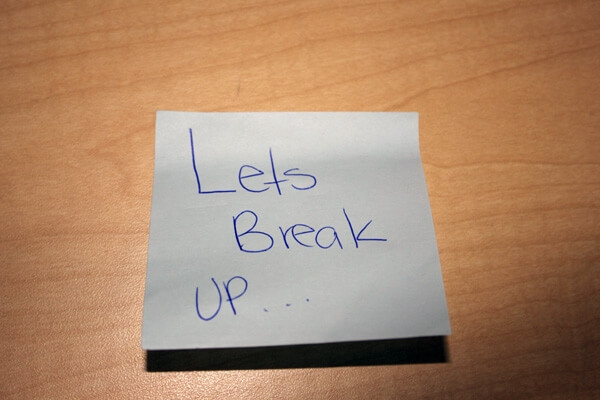 The Worst Ways to Get Dumped

Being dumped is never a good feeling no matter what the circumstances. Yet, somehow, the person we are head over heels in love with ends up finding the absolute most self-esteem killing, heart shattering way to do it! Here is CM's list of the worst ways to get dumped:

Imagine your boyfriend’s ringtone playing through your room and once you pick up, you hear, “I don’t want to be with you anymore.” It goes from a rush of excitement that your boyfriend is calling, to a complete let down that you will soon be alone. One of the most infamous breakups that happened just like this, was between Joe Jonas and Taylor Swift. Joe was accused of breaking up with Taylor with a 27-second phone call. Not only did she express her feelings toward him in her music, but she also created a video.

A phone call break up is harsh, but there’s nothing worse than waking up one morning to a 7a.m. break-up text. Whether expecting the break-up or not, it is one of the most heart-wrenching ways to be left. Just know that it is really just the coward’s way of saying he/she doesn’t want to be with you. Many people use this technique when too scared to even pick up the phone to call:  It doesn’t matter if the relationship lasted eight months or eight years, a breakup text message is one of the worst ways to be dumped.

BBM (Blackberry Messenger) is really the only non-verbal way of being dumped in which the dumper can ensure that you read the message.

“I was dating this guy for few months, but he lived in Jacksonville.  He was always calling or texting, making sure he kept in touch. One weekend he was supposed to come home, but was convinced by his controlling friend to stay down there and they would go out together.  He was so upset when telling me, but was very close to this guy. The night his friend visited, they went to a beach party. I didn’t hear from him the entire day. The next day he was being awkward and shady. Suddenly pictures on Facebook started surfacing, showing him and a bunch of girls. A couple nights later, he told me he would call me, but he never did. Finally, at about 1 a.m., he BBM-ed me saying that I was too much stress and if he moved back to New York maybe he would try to work things out again. Needless to say, I blocked him off of BBM and still [give] one-word [responses] when he texts me.” –Serena Nicholas, SUNY Binghamton

“(Insert significant other’s name) went from being in a relationship to single”– 12 likes. Imagine signing onto Facebook and seeing in the mini feed that your significant other is now single. This sounds almost too rude to actually be true, but yes, sometimes people are so nervous to even confront the person they want to break up, that they just make themselves single on Facebook. “If it’s not Facebook official, then it doesn’t exist,” right?

Social media tools are a great way to connect (disconnect?) with people. If nothing else gets the message through that you don’t want to be in a relationship with someone anymore, then tweeting them will definitely set the record straight. Less than 140 characters? Simple.

Yes, you heard this right. The Post-It breakup– though technically, any sort of short, to the point, written break-up can be classified under this category. In one of the episodes of Sex and the City, Charlotte meets the girls to share her new engagement. On the other side of the table, Carrie congratulates her and then tells everyone about her recent break up with Berger– via post-it. (1:08)

“Hey, I’m actually leaving… to never return for eternity.” This is a good hint that the relationship is over. In New Moon, Edward breaks up with Bella telling her that it’s for the best, but the way he does it is very cold, even for a vampire: he just leaves.

“My ex and I were together for four years. One day he initiated a date to the movies. He never really came up with things to do so I was excited that he made plans for once. Even up until that night we were close and all lovey-dovey in our relationship. During the movie we held hands and we were kissing a lot. When we got back to my room he says he doesn’t want to be with me anymore because he doesn’t love me anymore. After four years together and three years later, I’m still not completely over what happened.” –Stefanie DiMartino, Pace University

Being broken up with by someone that you weren’t even dating is pretty devastating. This concept is applied when your boyfriend/girlfriend wants someone else to do his/her dirty work. The worst part of it could actually be the person who does it. Usually it will end up being his/her best friend or your best friend breaking the bad news, but sometimes it’s even harsher. Having his/her new lover let you know that he/she found someone else is one of the most depressing ways of getting broken up with. It might even be the worst.

Previous Post:How Are You Celebrating Halloween?
Next Post:Halloweentown: Campus Edition