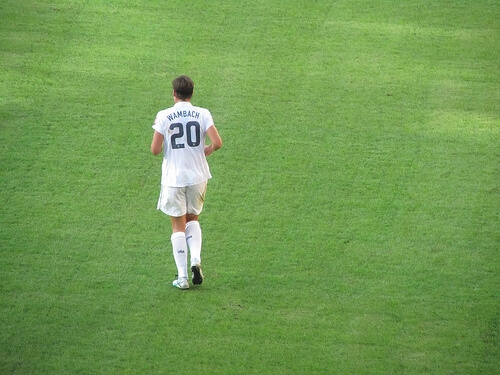 Choke job. There, I said it. The sound of the U.S. Women’s National Team gagging is still ringing in my ears. Yesterday, our juggernaut USWNT lost in dumfounding fashion to a Japan side that never beat the U.S before. Ever. They allowed two goals that needed a sprinkling of luck and hint of “holy shit did that just happen?” to keep Japan in the game long enough to take it to penalty kicks.

When the teams huddled up before PK’s, the Japanese side looked giddy and excited, ready for the task at hand. Our side looked defeated and tired. It showed in the shootout. The U.S. flipped the switch from choking to full on self-strangulation, missing three of four shots. Game over.

Now the women should be commended for their efforts, making it all the way to the finals and battling slew of tough teams; you can’t take that away from them. However, as a man of equality, it’s only appropriate to give them some heat for the loss. I have a history of lobbing bombs at the men’s team when they lose, especially when they let a win slip away. So in the spirit of equality I ask, why aren’t people more outraged? If the men’s team blows it on any level, they’re blasted. Their names are tossed into the fire like they committed a heinous crime while I lead the angry mob, pitchfork in hand.

Yes, I understand it’s women’s soccer, a sport not given much of a whiff by most, except during the World Cup and Olympics. But men’s soccer in this country is a relatively minor sport and our men’s team isn’t considered to be among the world’s best. Yet, our modest squad takes its share of beatings.

Many people were over the game as soon as Japan hit its final PK. Even more slept it off like it was a fun and exciting dream, doomed to disappear into the depths of your brain. For two hours, though, Twitter exploded becoming the biggest sports bar across the country. For two hours everyone was wrapped up in it, wide-eyed with excitement, patriotism pumping through the veins of America. For two hours we were all in on these gritty girls who looked to extend U.S. dominance in the soccer world.

Then they choked and it was rainbows, flowers and girl power all over Twitter instead of fire and brimstone. Again, I’m all about equality (And it’s one soapbox women love to stand on), so why isn’t this loss being looked at as a squandering of epic proportions?

Skewer me, drag me over the coals, lay me out or, preferably, send me virtual high-fives @SchwinkCT on Twitter. I love a quality Internet fight!

The real winner from yesterday’s World Cup final. This kid appeared on TV just for a second after the U.S. scored. Here he is in slow motion. Enjoy.