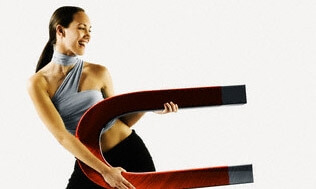 The Truths and Myths of Attraction

In the quest to win over your dream guy or girl, what do you do to make yourself appear more attractive? Do you dress differently? Do you spend hours at the gym trying to sculpt a desirable bod? Do you hold yourself back from acting â€œweirdâ€ in front of that person?

The unspoken rules of attraction dictate so much of what we do, whether we like it or not. From the way we dress, to the way we do our hair and make-up, to our diet, and even our manner of speaking â€“ our self-presentation is highly influenced by what society has deemed attractive. It seems that ever since we hit puberty, TV shows, movies, magazines, and even our friends and family have been telling us what we need to do to appear â€œhotâ€ to others.

But what if those rules are meant to be broken? What if all the things weâ€™ve been doing since puberty to make ourselves appear attractive, have actually had the opposite effect? Turns out, for many college students, what draws them to a person is not what you would expect.

Grace Eire from Skidmore College said sheâ€™s attracted to guys who are â€œtall, skinny, and paleâ€ â€“ a far cry from the buff men we see on the cover of GQ. â€œBut,â€ she continues, â€œI also really like when someone is funny or able to go back and forth with stupid jokes.â€

Grace Elire isnâ€™t the only person who loves a guy who can crack a joke. Julia Delorenzo, a senior at Boston College, said, â€œThere’s nothing more charming than self-deprecating humor.â€ Delorenzo also admitted that itâ€™s better to be funny and awkward than trying to come off as cool â€“ and sheâ€™s had experience with the latter.

â€œThis guy in one of my classes always hits on me and thinks he’s really smooth,â€ said Julia. â€œHe tries too hard for the whole â€˜bad boyâ€™ thing. Putting up a front is never attractive. Being nervous and awkward is fine as long as you take it in stride and embrace it â€“ it goes back to the whole self-deprecating thing.â€

As it turns out, guys are just as repulsed by false fronts as girls are. Dave Campbell, a junior at Texas A&M University, said that heâ€™s attracted to women who are â€œarenâ€™t fake or stuck up. They have to be down to earth, intelligent â€“ not naÃ¯ve, and have their own sense of style. Most importantly,â€ said Campbell, â€œIâ€™m attracted to someone who is funny and at least somewhat sentimental.â€

Intelligence and an easy-going attitude are common traits when it comes to what guys consider attractive. Andrew Wade from UCLA says, â€œIâ€™m attracted to girls who can have an intelligent conversation and are also witty and donâ€™t take themselves too seriously.â€ Notice he doesnâ€™t mention double Dâ€™s or perfect gym bodies.

Turns out, you donâ€™t have to pretend to be perfect in order to appear attractive. In fact, most college students prefer the opposite. â€œNot everyone is the same,â€ Dave says, â€œso they shouldn’t all try to look or act the same.â€ Yup, itâ€™s that simple.

So next time you consider changing your outfit or holding back a silly joke to impress the guy or girl youâ€™re interested in, think twice. Whatâ€™s really attractive is someone who is unabashedly them self.

Julia admits thereâ€™s one caveat, however.

Â â€œFake tans are a deal breaker.â€ Guess that leaves out the guys of Jersey Shore. Sorry, Pauly D.