Somebody Call 911: Why Last Night’s GIRLS Was Weird

Maria Minsker   January 21, 2013  (Updated: October 24, 2014)
Stalking is bad. That's the moral of this week's Girls episode, the second of this new season. Also, cheating on your boyfriend with a girl is frowned upon, and being pretty CAN get you a great job. This week's episode wasn't Dunham's finest work: it was choppy, and I found myself feeling slighted by the usually brilliant and witty dialog, especially during the Hannah-Sandy break-up scene. Still though, we love our GIRLS, and they can do no wrong. Yet. Anyway, here's what you need to know about last night's episode.
1. Adam has gone off the deep end, and is now making sketchy YouTube videos dedicated to Hannah. And what I find incredibly adorable (#TeamAdam), Hannah apparently finds totally frightening: "I know he always said he was murdery in like a sexy way, but what if he's murdery in like a murdery way?"

2. Elijah tells George that he had sex with a woman and George  gets really really mad and…passes out? Guess who he hasn't told about sex with Marnie yet, though? Hannah! But I mean why is he worried? It was only like "one or two pumps."
3. Shosh and Ray are tots happy together, cuddling in bed. And is it just me, or does Ray not seem like the cuddling type ? That whole scene was just, like, tacky. Doesn't Shoshana have classes to attend? Who has time to just lay around in bed on a weekday afternoon and chillax? 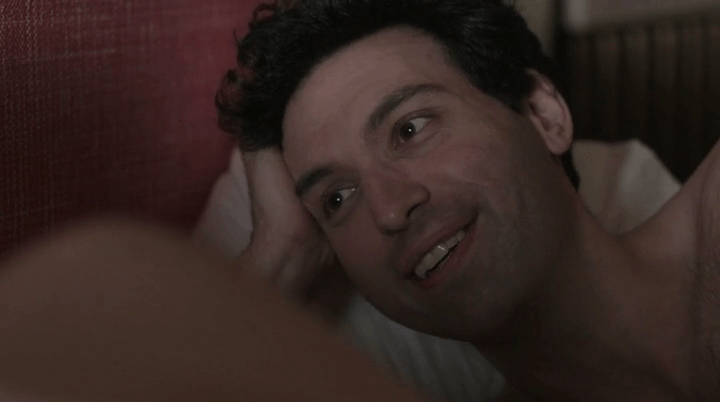 4. Marnie can't land a single job because "curator as a profession doesn't exist anymore." Guess she skipped all those meetings with her career advisors at school. Then again, so did I. Uh-oh… Shoshana advices her to cash in on her beauty and work as a hostess. By the end of the episode, Marnie gets a great paying gig at some snooty club and (total shocker here!) Hannah judges her. "But isn't it like catering to rich old men? I mean, I know I make $40 a day at Grumpies, but that's clean money, like I've made a choice not to cash in on my sexuality."

5. Hannah and Sandy break up because he's a republican? Or because he didn't like an essay that he asked her to read? I mean, if she didn't want to date a republican, why did she date a republican? As usual, Hannah's logic is beyond all comprehension so all you need to know is: they broke up.
6. Hannah comes over to visit Jessa, who is suddenly so happy with her life that I just want to barf. Things are so perfectly wonderfully awesome and she's just painting a picture of Thomas John on a beautiful morning. The sun is shining, things are fabulous and oh! there's a basket of puppies waiting for Jessa as her perfect husband leaves to work. Literally. That's what happens.

7. Bordering Totally crossing the line into stalker mode, Adam decides that it's appropriate to break into Hannah's house. Okay, so we has a key but key privileges are forfeited once you break up, right? Right. Adam totally nonchalantly tells Hannah that he needs her and can't be without her. He also asks for milk (do you want a cookie too, Santa?) and when Hannah goes to get him some…
8. She calls the cops from inside her fridge. But hangs up right away. No harm done, right?

9. After Hannah pushes and shoves Adam towards the door as convincingly as a toddler would, he seems to finally get the message. They're done. And then just as he's finally leaving, Hannah calls his name, and they have a moment. Their eyes lock and they connect in true Lady and the Tramp Meatball Scene fashion. And just for a second there is a glimmer of hope! But then…
10. The cops show up. Despite Hannah's belief that showing up every time someone calls 911 is "really alarmist and crazy," the cops do indeed arrive and take Adam away, but not for his stalking tendencies and his obnoxious outburst with Hannah in the staircase. Nope, he gets taken downtown for unpaid parking tickets and public urination.