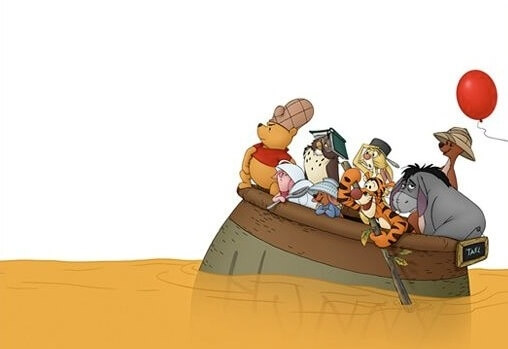 With all the talk of death and default in the headlines, more and more people are turning to the past for relief. Asking wistfully, “Do you remember when …?” brings back memories of simpler times, with childhood as the quintessential phase. And Disney, in a genius move, has capitalized on that growing nostalgia by releasing a Winnie the Pooh movie, revitalizing the adored British ‘90s TV series through an all-new adventure.

This time, the old gang, made up of Christopher Robin, Rabbit, Tigger, Owl, Kanga, Roo, Piglet, Eeyore and, of course, the lovable but daft Pooh, has a “very important thing to do”: finding a replacement tail for the ever-grumpy Eeyore, who seems to have lost his original. Yet the story ends up spinning in a completely different direction when Owl misinterprets a note left by Christopher Robin that says he will be “back soon” to mean he has been kidnapped by the evil monster, The Backson.

That’s the worst part about seeing kids’ movies as an adult, albeit a young one: The holes in the plot line stand out. There was no transition between Eeyore’s dilemma and the disappearance of the beloved CR, leaving me wondering if I, too, had really forgotten everything in an instant in order to turn to something more exciting as a child.

Each character’s eccentricities stood out as well. Of course, that is the point: Owl’s the bookworm; Rabbit’s the boss; Eeyore’s the pessimist and so on. But this time, these quirks seemed more ridiculous than endearing, especially when it came to Pooh, whom I remembered as being a bit smarter and less addicted to honey. Glorifying a teddy bear that cannot understand simple words and whose sole goal in life is a sweet treat only endorses idiocy and obesity for young children.

On the plus side, the animation was wonderfully well done, with old-school Hundred-Acre Wood interspersed with vivid graphics during musical numbers. The characters felt like old friends — thanks in part to Jim Cummings’ wonderful voicing of both Pooh and Tigger — and watching their antics gave me a warm, fuzzy feeling inside.

And since Winnie the Pooh is a flashback to the childhoods of current college students, the film was able to generate revenue not just from the G-rated crowd but from those who have left that world far behind.

Oakland Community College freshman Katie Broughton was just one of many students who had a positive reaction to the film.

“Winnie the Pooh was one of the best movies ever,” Broughton said. “Although it was a little short — about one hour long — I enjoyed every minute of it.”

Ultimately, Winnie the Pooh is a quick dose of a chapter of our childhoods, ready and waiting if an escape from real life is needed. But, as I discovered, nothing can truly take us back in time.