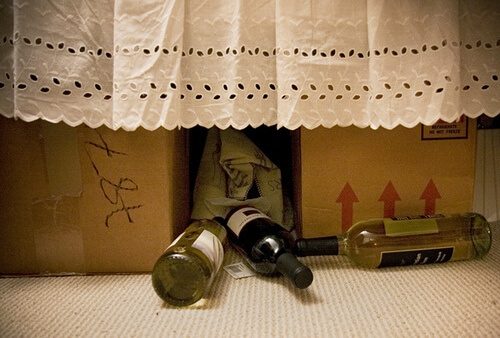 The Real Deal: I’m in AA

Lucy Gordon*, a recent graduate from Earlham College and a recovering alcoholic, shared her story with College Magazine.

Raised in Des Moines, Iowa, Gordon began drinking in high school, but was never reprimanded by her school or family for her actions. “Drinking and drugs were an accepted part of my family culture,” she explained.

When Gordon left home for Earlham, “a small Quaker school full of weirdoes, hipsters and hippies,” Gordon immersed herself in college drinking habits. “Binge drinking and drinking culture in general seemed to help form people’s identities,” Gordon recalled. “People associated me with whiskey and I associated feelings of communal acceptance and being well-liked with my ability to drink.”

As college progressed, so did Gordon’s alcohol intake. “I acknowledged to myself that I was a powerless alcoholic who needed to seek help from others. I had been kicked out of my senior house where I was living with my boyfriend, because I was drunkenly sleeping with our housemate.”

After relocating to a secluded housing area called Brick City, Gordon’s lifestyle seeped further into the cracks. “A switch went off in my head, this total, ‘I don’t care what happens now: I’m just going to drink wine and vodka all night,’” said Gordon. Gordon gained about 30 pounds, developed anxiety, shook in the mornings and began to bruise easily—an early sign of liver damage. “I drank half a litre of vodka every single day from June 2009 until September 2010.”

In June 2010, Gordon moved to Bloomington where she admitted to having reached rock bottom. Charged with drunk driving, Gordon was arrested and thrown into jail for 15 hours while she waited for her mother to wire money for her bond. While the legal blood alcohol level in Indiana is .08 percent, Gordon had been driving with .15 percent in her system. “Apparently I had hit a car, but to this day I don’t know what happened.” Gordon finally reached the point where she was sick of being sick.

“I had to go to Alcohol Anonymous (AA) meetings. I had to admit to other people that I was an alcoholic. I had to admit to my peer group more importantly that I am a young person with rapidly progressing alcoholism… I got sober amongst old farmers.”

Gordon said that she now attends meetings on a daily basis and does Big Book and Step work with her sponsor on Fridays. “I have hope for myself that I will not drink tonight and that I won’t drink tomorrow, that I’ll continue on this newly found path of putting the work into this program that is necessary to change my life.”

*Names have been changed.

If you or someone you know has a problem with alcohol, visit the Alcoholics Anonymous official website to find information on getting help.

Previous Post:Tweet for a Scholarship
Next Post:Building Your Social Media Presence