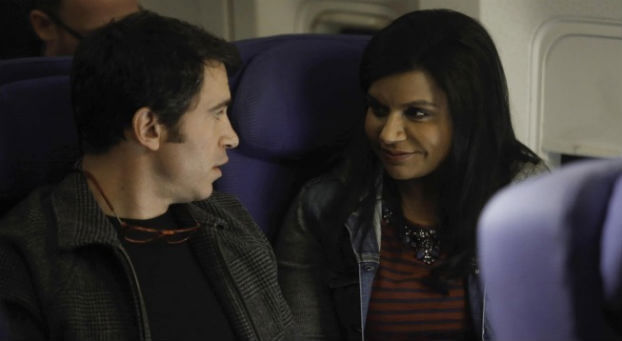 The Morning After: Reaction to The Mindy Projectâs Big Midseason Finale

I’m sorry for ever doubting you. I loved you as Kelly Kapoor on The Office, and I was beyond excited for the premiere of your own show (that you produce, write, and star in), The Mindy Project. But most of the first season was meh, and I began to lose faith. Just because you can spend an entire episode fooling around with Seth Rogen doesn’t make it a good idea.

I don’t know how you managed to flip the script with season two, but it has been soooooooo much better. Maybe it was fat Dr. Reed, toning down Morgan or the addition of Adam Pally’s hilariously broey Peter Prentice. Whatever happened, I’m going to make a bold statement and proclaim that The Mindy Project is officially the funniest show on television. Well done ma’am.

Besides upping the ante in comedy, you also managed to make me care about the relationship between Mindy Lahiri and Danny Castellano (Chris Messina). Because Mindy is paired with New Girl on Tuesday nights, and that show happens to contain the hottest couple on TV, I never thought twice about Mindy's obviously budding romance. Who can pay attention to those two when Nick and Jess are being adorkable together?

You did an expert job of moving Mindy and Danny closer together in small but important ways all season. Whether it was Danny telling Mindy that her body was great just the way it was or the two of them getting Danny’s crazy neighbor to believe they were a loving couple, their chemistry improved and the whole process felt organic. Oh yeah, and then there was the dance:

And then, bam! You hit us with last night’s episode. There was a nice bit of misdirection going on, with Danny trying to reconcile with his dad and Cliff getting some love advice from Morgan and Peter (“You tap that Cliff! You tap that into the sunset!”). You even had Danny and Mindy get into a pretty nasty argument.

Little did we know that we would get another big moment from Danny and Chloe Silverado (nice callback, by the way) on a plane.  As Mindy types a sorry note to Cliff, Danny acts as a sort of Cyrano, with every word clearly betraying his feelings for Mindy.

Mindy gets up, and the plane hits some turbulence in a callback to a season one episode when the two doctorial lovebirds accidentally held hands during a rough patch on a plane. Danny reaches for Mindy’s hand and comes up with air. He then proceeds to get up, find Mindy and plant a kiss on her that rivals Nick and Jess’s first moment of intimacy (“I meant something like that.”).

The best part was a pause halfway through the kiss. Danny and Mindy lock eyes, and Mindy subtly nods as if to say, “Yeah, keep going.” And then they do. Pure sitcom bliss.

Kudos Ms. Kaling. You’ve got me invested. Keep up the good work! Though this hiatus until April is going to be even more torture now than it already was. Come back already!

P.S. Fox: don’t be dumb. If you cancel this show, you’re ruining Fox Tuesday nights. It doesn't get much stronger right now than the trio of Mindy, New Girl and Brooklyn Nine-Nine. Keep Mindy around and replace Dads with a real show. Then Fox Tuesdays will officially be the new NBC Thursdays when it comes to the best comedy block on TV.

Previous Post:Don’t Be “That Guy” in the Gym
Next Post:4 Assumptions Straight Women Make About Their Gay Friends