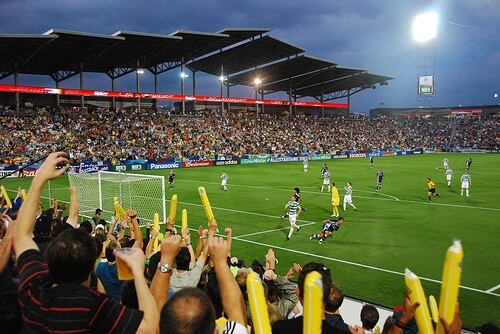 The MLS Needs To Battle The Euros

When it comes to soccer and America, the U.S. women’s national team’s run to the World Cup finals certainly can’t hurt the cause. However, it’s unrealistic to expect any international success – by women or men – to be the watershed occurrence where this nation suddenly embraces soccer like football or baseball or basketball.

Soccer is not going to ever truly arrive here until Major League Soccer can change its image from that of a comparatively minor league.

I mean no disrespect to MLS. Professional soccer is here to stay in America.

The league long ago proved itself a viable operation. It’s absolutely amazing – and a testament to the league’s legitimacy – that of the 18 current franchises, 11 of them play in venues built for them, and three more soccer-first stadiums are currently under construction.

However no one, not even the most dyed-in-the-wool, diehard soccer fan, can claim MLS is on the same level as the Premier League, Champions League and many of the other professional leagues in Europe and elsewhere around the world. The level of play and caliber of players in those leagues are simply better. So, the MLS is seen as the best soccer has to offer here in America, but as a league of lesser prestige worldwide. Such a distinction means little to the league’s core audience, but it hampers MLS when it comes to the casual fan.

How does this change? One interesting possible method might be to reach back and take a page out of the American Football League’s playbook back in the 1960’s. The AFL started play in 1961. By 1964, it had solidified its standing as an alternative to the older, more respected National Football League. However, it did little in the way of directly competing with the NFL, instead opting to carve its own niche out in different markets.

That changed when Al Davis, the longtime and much maligned owner of the Oakland Raiders, became the AFL commissioner. People lampoon the elderly Davis today, but he was arguably one of the most influential men in the history of American sport once upon a time. Under Davis, the AFL completely changed course and decided the best way to get what it wanted – respect, a AFL-NFL championship game and an eventual merger – was to take the fight to the NFL. Outbid for college players. Buy established veterans. Expand into cities the NFL coveted. Battle for better television deals.

By 1966, the NFL wanted no more, and the leagues agreed to merge, setting the stage for a little game we today call the Super Bowl. Maybe that’s what MLS needs to do. Obviously its situation is different in many ways, but in other it’s similar.

MLS needs to try and buy away top-name international talent, and not just aging stars like David Beckham. Find loopholes in the complex European contracts and throw the world in cash at superstars. Mine junior leagues and try to bring youngsters to America early. Hell, challenge the Champions League winner to a home-and-home – one across the pond, one here on American soil. Make some noise. Take some risks.

At first, MLS probably wouldn’t do too well. Remember, the AFL was waxed by Green Bay in each of the first two Super Bowls. But, if it kept at it, eventually the challenges would lead to improvement. Then one day, soccer would get its Super Bowl III, its Joe Namath running off with one finger held high.

Then, the paradigm would shift forever. Then, soccer would have finally arrived in America.

Previous Post:Three ‘Glee’ Characters to take final bow
Next Post:Sex on the Beach? Maybe Not…