Shop now
Home » Latest Posts » The Many Origins of Love, Music and Everything In Between: CM Interviews Pop Singer MIKA
Celebrity Advice Life

The Many Origins of Love, Music and Everything In Between: CM Interviews Pop Singer MIKA

He’s hilarious, adorable and quite possibly the most unique ball of energy to perform on stage. The dance party has kicked off as the incredibly beloved British singer-songwriter Mika is “running around again” on a U.S. tour with his newest album, “The Origin of Love.” The album released in September giving fans the opportunity to experience the “mystical revelation” the album’s title transcends from.

But where did this ridiculous burst of creativity derive from, anyway?
Mika takes CM back to his younger years, sitting at home and school despising the frustrating situations he'd find himself in. “I absolutely hated the world I was in,” Mika recalled. “I was like, ‘I’m going to create my own world, and I can make anything happen within these walls with a piano in front of me. I realized this was a transformative power and anyone can have if they want it.” After realizing a sense of control over his discouragement, Mika’s desire for music and writing strengthened. “It wasn’t necessarily an escape — more kind of a survival. If I write something, then everything’s okay.”
Two albums and a grammy nomination later (not to mention the many awards won in Britain) a 27-year-old Mika took full advantage of writing an album about the concept of love. “I knew that was kind of rare and I wanted to grab that, because I knew I could look back on it in 15 years and go, ‘What the f-ck was I thinking?”

With his newest album title, Mika discovered a huge amount of scope and freedom to talk about passion from all angles. “I thought it was a really cool overarching concept for a record,” Mika said. “A record that talks about love, but in trying to get to the origin it enabled itself to talk about every type of love: the good type, the ugly type, the violent type, the bitter-mean type, the drunk type, the elated type – the kind that makes you feel like you’re a six-year-old kid again.”
But even is his latest album, Mika still allows access to his personal revelations. “When we talk about love, we’re really talking about ourselves overwhelmingly and dealing with the person that we are,” Mika said. “Until we can actually look at ourselves in the mirror and think that we’re kind of okay there’s no hope in hell that we can enter into letting someone else think we’re great.”
The Convenient Truth
In a fast-paced world and through the thrills of traveling and touring, Mika warns against the idea of losing creativity to convenience. “I think when you’re on tour it can be quite destructive — you just become an interpreter," Mika said. "You become obsessed with convenience – what plane you’re taking next, what time you’re taking the cab, what’s the next soundcheck, what time is dinner — all of these things take over your life. You’re always moving, but you’re never actually making anything.”
Of course, not “making” something is certainly not an option for a touring Mika, “If I don’t write or make something I feel like a piece of sh-t, and I don’t really feel very valuable,” Mika said. “I feel like I always have to write something or make something, and then I feel like I’ve kind of calmed down the devil in me.”
Surprisingly enough, Mika’s energy seems to be strictly reserved for his musical performances as bits of his big-footedness laced with awkwardness shines through in other occasions. “Behind the piano I’m energetic and confident, and I might be on stage and be like, ‘Yea! The world is my oyster!’ but put me at a party and I don’t know where to start.” Mika admits in real life he’s actually pretty shy. “If I’m in an interview I’m fine, but if I’m at a party it ends up so uncomfortable that I end up drinking five glasses of wine whenever everyone’s still on the second,” Mika laughs. “And then I look like a complete d-ck, because then I say even worse things.” 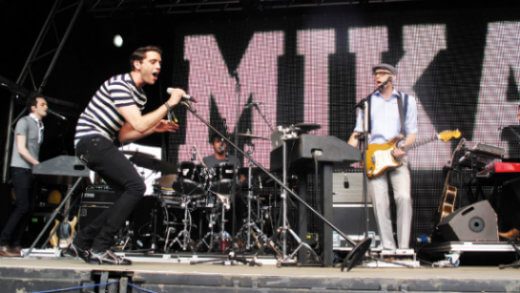 So, what’s on the iPod?
As Mika dives into an eclectic pool of music, he’s currently the biggest fan of anything from the Girls soundtrack. “I’m pretty sure Lena Dunhman stole my iPod and stuck it on the TV show,” Mika said. “It’s really fun and tasteful pop music.”
“I don’t think people realize that in the UK, things like Regina Spektor, The Shins, Postal Service — we don’t have that. It’s this idea that it doesn’t have to be Indie Rock or dance or really cheesy, but It can actually be melodic, cool, progressive and intricate music that has a lot of charm,” Mika said. “I’m really inspired by the pop scene that is allowed to be happening in America.”