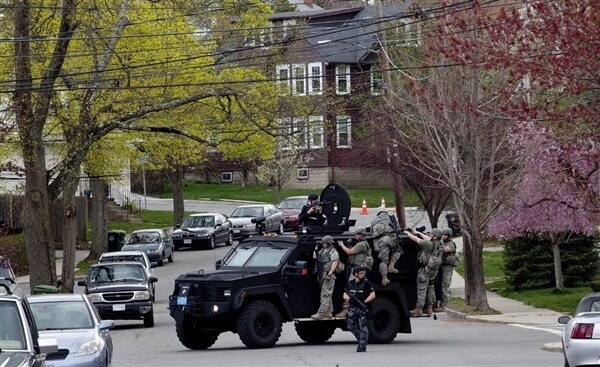 The Lockdown on Boston: A View from the Inside

Anna NovikovaApr 23, 2013
Home » Latest Posts » The Lockdown on Boston: A View from the Inside
FacebookTweet

A week has passed since the bombing of the Boston Marathon. Yet the sigh of relief was only felt this weekend, after a manhunt for one of the suspects shut the entire city down Friday.

Here are the main facts:

As a college student and resident of Boston, one could feel the city mourning the events of Monday. Most were still on-edge when my social media began exploding with reports of an MIT police officer gunned down on campus. For some reason, it didn’t really cross my mind that these two events could be related. What at first seemed like an isolated incident escalated to a huge police chase, all in less than an hour. For the second time in a week, I had friends contacting me from all over the country asking what was going on in Boston.

When I went to bed Thursday night around 2 a.m, the story was still developing, and updates were quick but very confusing. I live in Lower Allston, about a 15-minute walk from Harvard Square in Cambridge, and I could hear sirens from my window every 10 minutes as I fell asleep.

I awoke early Friday morning to frightened text messages from my friends and a lengthy safety alert from my university’s police department: “The University is canceling classes today as a result of events related to the ongoing police search for the second suspect in the Boston Marathon bombing.” It also stated to remain inside and avoid windows, as a citywide “shelter-in-place” was in effect. The MBTA, the city’s public transportation, was shut down entirely. I immediately knew the situation was serious. One of the things I quickly learned about the MBTA and my school when moving to Boston is that they both very, very rarely close, only in the case of extreme weather conditions.

When they say the city was on lockdown, they weren’t exaggerating. Barely any businesses were open (save for Dunkin' Donuts, of course), and residents were forced to stay inside. As we were cooped up, photos surfaced of "ghost-town Boston" and of SWAT and FBI teams all over Watertown and Cambridge. The suspect was on the loose, armed and dangerous, and police were going door-to-door in Watertown in order to narrow their search. It was a real-life manhunt and it was the closest thing Boston had ever experienced to Marshall Law. Yes, in some countries occurrences similar to these are very frequent. But to most people in Boston and all over the nation, this was something new. And as desensitized as I usually am, this lockdown was very surreal and pretty terrifying.

I was alone all day, as one of my roommates was in Florida and the other was stuck in Cambridge. I definitely could have used the extra time to catch up on homework, but it was hard to concentrate on anything but staying on top of the situation. Social media was a huge part of this entire fiasco. I don’t think I’ve ever spent more time in one day on social media (including finals week) as I did on that Friday. It was weird – I sometimes felt like we were getting the news faster than some news publications, probably because we were actually living the news.

When the ban was lifted and people were allowed back on the streets, there was a feeling of confusion instead of relief; why could we go outside if the suspect was still at large? Less than an hour later, I heard from my friend in Watertown that rounds upon rounds of shots were being fired again. The suspect had been found in a boat. What ensued was  a very nail-biting experience where I simultaneously felt excited and very worried; everything could end now, but what might happen if the suspect was found? Would more bombs go off? Would more lives be lost?

As I sat alone in my living room, I realized how in debt we all are to the courageous people who are willing to be part of the law-enforcement. Things like this don’t happen every day, but when they do, it’s easy to see how lost we would have been without the police and other law-enforcement agencies.  Finally, around 8:45 p.m., my Twitter feed exploded with updates that Tsarnaev was indeed in custody. For the first time all day, I truly wished I wasn’t alone so that I could share in the relief with my friends. In minutes I could hear hoots and shouts down my street, and the entire city soon erupted in a spontaneous wave of celebration and appreciation. College students, usually bashing on the local law enforcement for cracking down on parties, went out of their way to cheer, shake hands with, and hug police officers. Fenway Park and the Boston Common were filled with people embracing each other, crying together, singing together and rejoicing in the start to some justice following a horribly sad week.

BusinessWeek estimated that Boston could have lost anywhere from 250 – 300 million dollars in revenue. With all that the city lost that day, though, it also gained a greater sense of community.

On Saturday I went to the bombing site for the first time since the previous weekend. There was a makeshift memorial set up by one of the metal barricades, and there were so many people quietly paying their respects. People had left posters and poems, tied flags and shirts to the barricade, and left bouquets. It was depressing and uplifting and beautiful all at the same time. For the first time that week, I started to cry. It is true that people come together during an emergency or tragedy, and I witnessed that on a huge scale this past week, especially on Friday. My only hope is that it will last as long as possible, because at the end of the night, the feeling that showered down on Boston along with the rain was very hopeful, real and human.