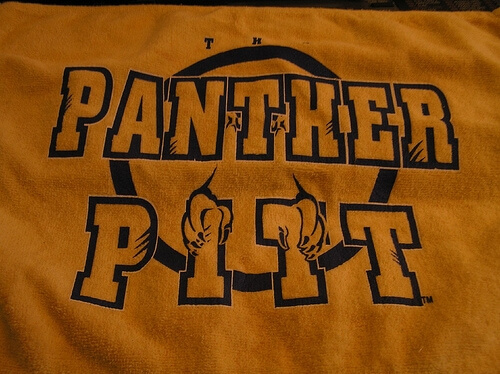 Starting next year the college football landscape will shift, throwing teams into new conferences in which they have no connection geographically. Along with these shifts, a few good rivalries will see their end this weekend.

Last night, The Lone Star Showdown between Texas and Texas A&M came to a temporary-dramatic conclusion with the Longhorns sending the Aggies off to the SEC with a loss on a last second field goal.

For the Aggies, its move to the SEC is driven by the almighty dollar and its desire to get out of the Longhorn’s shadow. Texas had to show them who's boss one last time, with a win that said,  “I hope you enjoy middling in the SEC West.”

Tonight’s rivalry match up between West Virginia University and the University of Pittsburgh is different. Both schools plan on splitting from the flailing Big East by next year. Pitt made the first move by pledging its allegiance to the ACC, while WVU decided to take the last bit of football value the conference had and extended a hand to the Big 12.

When Miami, Virginia Polytechnic Institute and State College and Boston College jettisoned for the ACC, the conference’s football intrigued dipped significantly. What’s been steadfast with this incarnation of the Big East has been the rivalry between WVU and Pitt. There isn’t another rivalry in the conference that can be counted on every year to be as tightly played and as entertaining.

For what will be the 104th time, the two schools will square off with nothing but bloodlust and malice on the brain. You know all those rivalry games that have lame trophies given to the victor? These teams don’t have a trophy, they just plain don’t like each other.

With the Big East unbound and both teams headed to different conferences, the Backyard Brawl is threatening to head the way of the dinosaur. I don’t think the rivalry will be completely discontinued, although scheduling conflicts might end it for the foreseeable future. That’s why tonight’s game is so important. Five years from now, if they don’t face off again, fans from both sides will remember how the final game ended and who put the stamp on the series finale. The game bears even greater importance with conference title and BCS berth implications on the line.

It's going to be a heated affair, just like last night’s Lone Star Showdown and just like tomorrow’s Border War between the University of Kansas and the University Missouri (also making a break for the SEC).

Keep an eye on this tilt as you roll into your post-Thanksgiving weekend. It could be the last time we hear the famous “Eat shit Pitt” chant reverberating through Milan-Puskar Stadium. As a WVU fan, that thought makes me feel a little empty inside.

Previous Post:Under The Covers: Playlist
Next Post:Majoring in Life’s Experiences