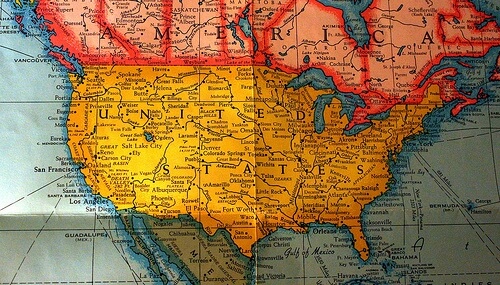 The Geography Of Sports

Now that it appears Boise State, SMU and Houston (and possibly Air Force and BYU) are headed toward a union with the Big East Conference, now is as good a time as any to examine the liberties our sporting world take with geography. Apparently, our educational system has failed the various franchise owners and school presidents out there, because these guys make decisions like they’ve never owned, or seen, a map.

So, without further adieu, the seven rules of sports geography:

Indianapolis is south of Baltimore

The NFL says so. The Colts, who reside in a northern city, play in a South division with Tennessee, Houston and Jacksonville, all most certainly cities in the southern part of the country, while the Ravens, in a southern city, are placed with teams in Cincinnati, Cleveland and Pittsburgh in a North division.

Pittsburgh is on the Atlantic coast.

Well, at least it is starting in 2014 or whenever the hell Pitt leaves the Big East.

At least the Ravens/Colts thing only affects two teams and, if there was ever a desire to correct it, could be rectified with a simple swap. This case is an absolute mess. The desire to keep rivalries going (which isn’t necessarily a bad thing) has led to total discombobulation amongst three divisions. And we’re not done with the state of Missouri yet.

Missouri is soon to be a southern and eastern state

If Mike Slive says it, it is true. But not until Mizzou leaves the Big 12.

Thirty teams. Six divisions. And not one stupid geographic faux pas. My lord, Bud Selig got something right.

Winnipeg, Manitoba, Canada is located in the American southeast

OK, it’s because the Atlanta Thrashers relocated to Canada. But still. Everyone saw the move coming. The NHL couldn’t plan for it? Oh yeah that’s right. It’s the NHL.

Everyone is the west, so long as it is ‘Great’

The Great West Conference stretches from California (very west) to New Jersey (very not west) with stops in Texas (borderline), South Carolina (no chance), Illinois (nope), the Dakotas (yes), Maryland (nah) and Washington D.C. (hell no). Give us your tired, your poor, your Olympic sport programs in need of whatever conference affiliation is on the table, logic be damned.