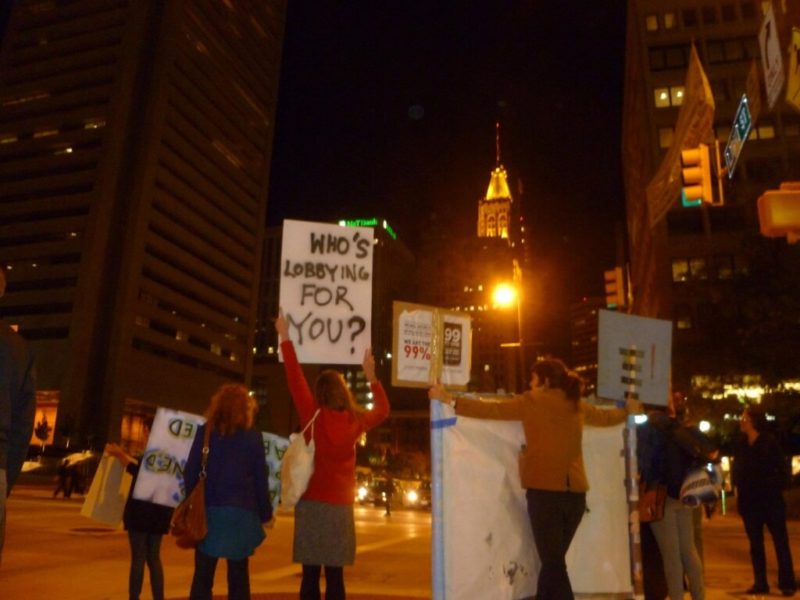 It isn’t a hunger strike on campus. It isn’t a civil rights march on Washington. It isn’t a sit-in at the student union. No, the days of your parents’ generation and their romanticized form of political activism are over.

Today’s students are much more inclined to follow a Twitter feed than a bullhorn protestor on a street corner. They are more likely to donate a Facebook status than money to a cause. But does it end there? Is this the generation destined to change things through “likes” on Facebook? Or does new technology offer students ways previously unimaginable to get involved and truly reshape the world?

Enter the Occupy Wall Street movement. Whereas the Tea Party protests of the past few years were characterized by the middle class and employed, this new breed of protesters currently camping out in downtown Manhattan and spreading to cities across the country are distinguished by the young and disenfranchised:

The “Occupiers” may not have a coherent message or an end goal, but do protests always have those things? What these protests sprouting up in city after city across America do share are tech-savvy youth. At each protest one can find media centers filled with computer-carrying students working the social networks in order to create a buzz.

“People want to see action, and this is it – right here,” said Ian Logsdon of Baltimore referring to the Occupy Baltimore protest, an offshoot of the New York protest that began on September 17th. “But Twitter is how people hear about it.”

Logsdon considers himself typical of the “99%,” the silent majority of Americans overlooked by political negligence and corporate greed, a rallying cry of the protesters. He was a 2008 graduate of University of Maryland Baltimore County with a major in Political Science and is currently working on a M.A. in non-profit management from Notre Dame University of Maryland.

He knows that most college students often worry about finding work before they can turn their attention to political activism: “It’s hard to get out of the armchair and do something – but I think this a movement that can generate enthusiasm.”

Shan White, a Baltimore native taking a semester off from Prescott University to work at an internship at Baltimore Green Currency, feels that college students often deserve the apathetic label.

“A lot of people realize there is a problem, but they do nothing more than press ‘like’ on Facebook. But now that there are fewer jobs and opportunities, I think that may change.”

More and more youths are finding innovative ways to get involved in not just street protests like the Occupy Wall Street Movement, but also in new start-ups seeking big changes to the way we think about political involvement.

Consider the new group Americans Elect. With campus chapters starting up all over the country – just a month into most schools’ fall semesters, the organization is already located on over 100 college campuses – Americans Elect seeks to give students a new way to become involved in the political process.

They are encouraging students to sign on as delegates for their own presidential nominating convention to be held online in June of 2012. It is a convention separate from that of the Republican or Democratic conventions, and it is a process that is seeking to allow all to get involved in the debate and voting. All registered voters are encouraged to join and everyone will be given equal opportunity to have their opinions heard.

Here’s the catch: whoever the Americans Elect virtual community chooses to run for president through this online convention is set to be on the ballot in all 50 states. That’s right – this is a group that means business. And for the first time in American history, the candidate on the ballot will have been chosen by a truly popular and non-partisan effort.

College campuses have always been a hotbed for political activism and creative problem solving. But for the first time, students of the 21st century have the technology to get involved in ways their parents could never have imagined. Whether it’s promoting public democracy on the streets via protests or using the Internet to choose the next president, college students are finding ways to have their voice heard.