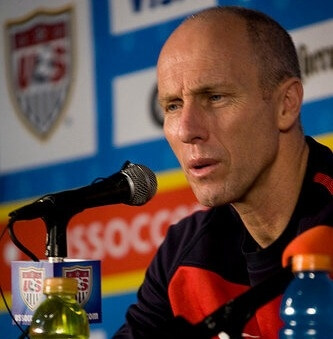 The Case For Sacking Bob Bradley

During the Gold Cup, Bob Bradley appeared to be both a genius and a highly incompetent coach.  Bradley allowed former phenom Freddy Adu to play a major role on the United States National Team.  He benched Landon Donovan for two pivotal games, but effectively coached the United States to the finals.

After weighing it out, I am leaning towards the later: Bradley is incompetent.

Recently, Bradley oversaw the first-ever American loss in the Gold Cup group stages.  The American coach was also mere minutes from seeing the elimination of the United States from the World Cup. He forfeited a two-goal leads in both the Confederation’s Cup and the Gold Cup Finals.

The U.S. must have a national team must have a rock solid defense if they want to succeed. Defense has been Bradley’s weakness. America should not be a national team that surrenders two early goals to Panama and Slovenia, three straight goals to Brazil and four consecutive goals to Mexico.  Mexico and Brazil are strong teams, but if your team takes a two-goal lead, you can’t give that up..

The worst part of Bradley’s reign, was coaching during the primes of the two best American players in history,; midfielder, Landon Donovan, and goalkeeper, Tim Howard. The only hardware he has to show for this talent is the 2007 Gold Cup.  American fans can only hope that Bradley or America’s next coach will take advantage of this talent.

Bradley is not nearly the worst coach the United States has ever had, but there clearly needs to be a change.  No one can discount his 2007 Gold Cup victory, but that was over four years ago.  The question is, though, how can you keep Bradley when the United States could pick up Jurgen Klinsmann or another high profile coach?  Klinsmann led an inexperienced German team to a third place finish in the 2006 World Cup, and the Germans loved him so much that he received a Medal of Honor from the government.  Let’s hope that after the 2014 World Cup the United States President is awarding Klinsmann the medal of honor.