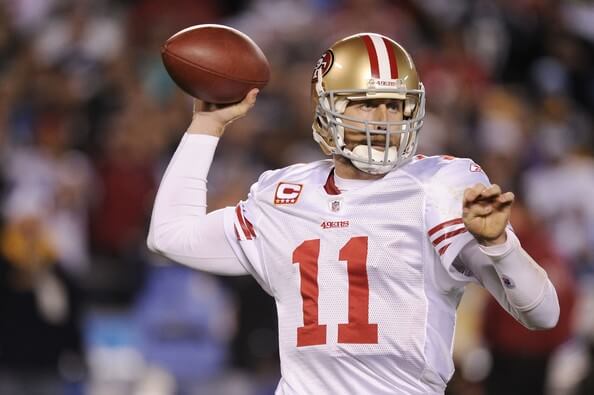 With one 14-yard strike to his tight end Vernon Davis, most of Alex Smith’s critics were silenced. Some of them had already been silenced just minutes earlier.

The Smith-to-Davis connection with nine seconds left in Saturday’s NFC divisional round game capped off a 36-32 victory for  the 49ers team – a team he put on his back for perhaps the first time in his career.

With three passing touchdowns (all with pinpoint accuracy) and a rushing touchdown (on one of the most gutsy play calls I’ve seen in a while), Smith took the giant leap forward from “game manager” to game winner. Smith will have to take another giant leap this Sunday if he wants to beat, well, the Giants.

The first overall pick in 2005 out of the University of Utah, Smith never really found consistency in any facet. He has dealt with seven different offensive coordinators in seven years, which means seven different offensive systems. He has also had three different head coaches, although it looks as if his current one, Jim Harbaugh, is there to stay. Harbaugh’s fiery attitude coupled with Smith’s laidback demeanor has really put a charge into the 49ers offense, which is great news for a team who had to do it with stout defense and a solid run game for most of the regular season.

This year’s 49ers squad may very well be the most physical team in the past decade. What they lack in sheer skill they make up for in brute strength and determination. Smith is the epitome of this formula. Often overlooked, like many of his teammates, he just goes about his business, and after many years of disappointment, Smith is finally winning.

Nobody is going to put Alex Smith into elite quarterback status – not yet at least. But while his team was winning with him just a few weeks ago, they are now winning because of him.

Previous Post:Slip into Style
Next Post:The 10 Most Hipster Students