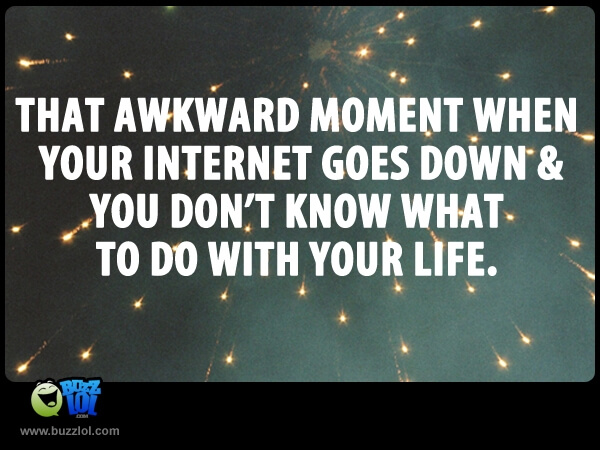 That Awkward Moment When…

Awkward moments are the essence of human relations. People thrive on these memorable moments, albeit some would rather have these memories erased by a case of amnesia. How many times have you run to your friends, ecstatic and ready to tell them all about how you said ‘hi’ to your taxi driver and he said ‘hi’ back as if it were completely rehearsed? Usually it’s the time when you waved at a person who was actually waving to someone behind you which will become a story to tell later in the day —you know, after the initial “ZOMG this is like so embarrassing I could like totally die” thoughts fade away, along with that alarming shade of red your face has turned.

Then again, there are people who could give a rat’s derriere whether or not an awkward moment could turn into a story to tell friends later on – they want to steer clear of looking foolish at all costs. (Fact: in 100% of these cases, the cost is often their sense of humor.) But despite their efforts to defuse an awkward moment, many people – as W.T. Woodson alum Chris Byer put it – end up in “that awkward moment when you just had an awkward moment and you try to fix said awkward moment, only to make it more awkward.”

Whether you have sacrificed your humor at the cost of looking cool or legitimately find yourself in awkward situations so often you need to be guided out of them, College Magazine has just the solution: a few tips on escaping some of these moments.

We’ve all been in that awkward position before: where someone, be it a waiter or the clerk at 7-11, says “enjoy!” You, assuming they were going to simply wish you a good day, respond with an emphatic “you too,” only to kick yourself on the way out until you bruise. Luckily for you, James Madison University’s Jacob Barry found a way of averting the awkward “you’re an idiot” look that ensues after the slip-up. “Don’t just end after ‘you too.’ Try turning it into a sentence, like ‘You’re too kind, thanks!’”

Are you one of those people who’s always texting in class, to the point that a professor has to call you out on it? Believe it or not, there’s a way to get out of that awkward situation – and even get out of class! Junior Sarah Sadie managed to get out of her marketing class by telling her professor she’d been texting her mother about a terrible accident her father had just gotten into and had to leave ASAP.

If you’re like me and often find yourself sitting in the wrong class, it can get embarrassing, especially if it takes you 30+ minutes to realize you’re actually sitting in on a class on feminism and not History of Architecture. Instead of making a big fuss about it, just tell the professor you’re in the wrong class, that you’re actually not intimidated by the work-load and the true reason for not leaving earlier was because you didn’t want to leave and have 34 people assume you were just turning your back on feminism.

Have you ever found yourself staring at a girl’s shirt, only to have her assume you’re staring at her goods? Ladies, don’t lie, you’ve done it…but it’s guys who can’t seem to get away with it. Girls will flip out and then probably flip you off without even thinking that it could be their Arrested Development “I just blue myself” shirt which attracted your gaze. How did University of Massachusetts sophomore Emmanuel Rodriguez manage to get out of the awkwardness that ensues getting caught? “Play blind – it works even better if you’re already rocking shades.”

What’s that? The blinds on your window rolled up while you were jamming to Ke$ha whilst butt-naked, putting you in plain view of half the campus? Well you could always blame that on…nah, you’ll probably have to switch schools after that one.