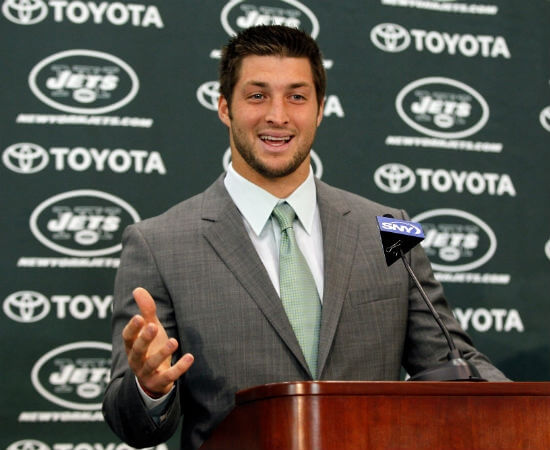 Tebow gets cold shoulder from Jets

Tim Tebow may back out of his $2.6 million 2013 season with the Jets next year. After an embarrassing 8-8 season in 2011 and an even rockier 2012 season by Jets starting quarterback Mark Sanchez, Jets coach Rex Ryan named Greg McElroy as the team's newest go-to quarterback.

On Tuesday, Manish Mehta of the Daily News reported that Tim Tebow will request a trade or to leave the team at the end of this season. “It's my decision… and I'm choosing to go with Greg," Ryan told Mehta. The news comes as no surprise to Tebow's massive fan base who only saw a total of 39 yards on eight passing attempts this season. Two years remain on Tebow's five year, $11.25 millon contract with the Jets, which was signed in 2012 when he joined the team by choice after being released from the Denver Broncos.

The question remains, what's Tebow's next move? Among the speculation that Tim Tebow will leave the NFL all together, there are also questions as to why Tebow was thrown into the game during the second quarter against the Tennessee Titans on Monday. Some believe that mostly ineffective 12 yard run he had may have served as somewhat of a try-out for the Jets No. 2 quarterback. So who is this McElroy guy? Well, he has no signature moves – at least none as comparable and recognizable as 'Tebowing'.  McElroy is on his second year out of Alabama. His first â€‘ and so far only –  NFL playing time was spent on the Jets' Dec. 2 game against the Arizona Cardinals, where he brought the team to a 7-6 win over the Cardinals. As a compensation gift, Tebow can take a good reputation with him wherever he ends up, because it almost certainly won't be with the Jets.

"I'll say this about Tim and I've always said it: I know he wants to help this team be successful in the worst way and there's no doubt about that," Ryan told the Associated Press.