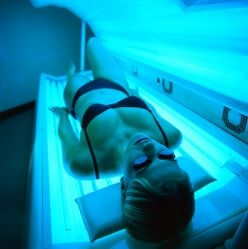 With the rise in popularity of shows like "The Jersey Shore" and the increased influence that celebrities are having on younger generations, it may not come as a surprise that many young women are finding more pleasure and relaxation in indoor tanning.  The epidemic more widely referred to as ‘tanorexia’ – the importance of looking thin and bronzed year-round –  is very prevalent among college-aged girls because they are the most easily influenced by the media that “glorifies having a sexy, glowing tan.”

Unfortunately, because of the increase amount of endorphins that are released during ‘fake baking,’ many  girls forget the risks that are associated with tanning – skin cancer, eye damage, immune suppression, premature aging and even addiction, reports the Food and Drugs Administration. The International Agency for Research on Cancer found that the risk of melanoma of the skin – a serious, often fatal form of skin cancer – increases by 75 percent when tanning beds are used before age 35. Additionally, the American Academy of Dermatology found that melanoma is the second most common form of cancer in women ages 20-29.

How can women possibly ignore these statistics? Well, the endorphins that are released are part of the chemicals that are responsible for producing “the same feelings of euphoria that entice drug addicts and alcoholics.” Because of this new addiction, many girls find it easier to ignore the dangers of tanning and do not understand or recognize when they have taken it too far. Coupled with the impact of the media and young womens' obsession with their physical appearance, having that ‘perfect tan’ is just one, unhealthy way they think they can get there.