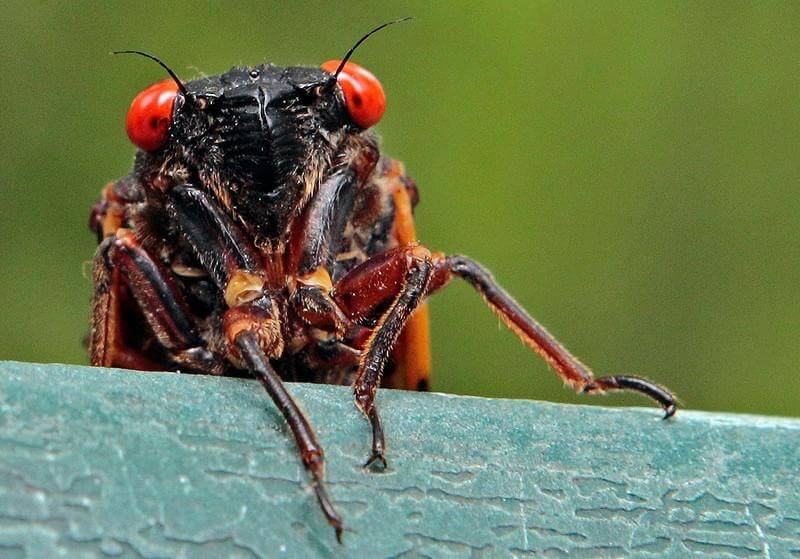 Elizabeth O'ConnorJun 28, 2013
Home » Latest Posts » Surviving Cicadageddon 2013
FacebookTweet
Cicadageddon 2013 is upon us, and it looks like we’re really in the thick of things now. For those of you who are not aware of what this entails, let me fill you in: every seventeen summers, a hoard of literally billions of cicadas, pictured below, rises from the ground on parts of the East coast solely to breed (no, I’m not describing a science fiction film; this is real life).
The cicadas breed frantically before dying, at which point their vile offspring are born. Then, like Hilary Duff in 2003, they go through a metamorphosis, leaving their disgusting brown shells everywhere and descending into the ground where they’ll remain for the next seventeen years. You can read more about these tiny aliens here, but I’ll give you my personal account first. 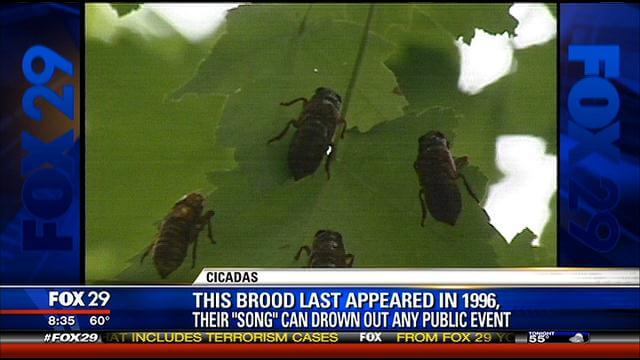 Cicadas are insects the size of an adult thumb that have the durability of cockroaches and the wings of small hummingbirds. They have evil red eyes, claw-like legs and a three-inch wingspan. They exist for the sole purpose of making humans feel disgusted. It’s impossible to walk down the sidewalk without crunching on their shells because they blanket the ground like snow in some places, particularly near trees. Then they fall out of the trees and land in my hair. I can’t drive anywhere without them splattering onto my windshield, and my dog has become so obsessed with eating them that he’s actually managed to gain a full five pounds. They “sing” (screech) all night long in the trees. Several have already flown down my chimney and into my living room, and bug spray won’t stop them. As you can see, they are literally something out of a nightmare:

http://i.huffpost.com/gen/1117016/thumbs/r-CICADAS-ARE-COMING-large570.jpg?8
Maybe I’m being a little bit dramatic. I know cicadas are harmless, but they’re also huge and disgusting, and they give me the kind of shivers down my spine that have previously only been reserved for horror movies. So I’ve developed some tips that have helped me (so far) to combat the cicadas and effectively survive what I’ve dubbed Cicadageddon 2013. I hope that they’ll help you as well:
1.    Avoid wearing open-toed shoes. This will help to keep cicada shells from getting between your toes when you walk around. Yum.
2.    Let your dog rock on. Let your dog keep eating them, and encourage him to eat them alive so they suffer as much as possible. Walk your dog around the yard, pointing at each cicada and saying “treat” so he gets the message. Great news: they’re full of fiber and protein!
3.    Play cicada tennis. 1 point per cicada. First one to 25 points wins.
4.    Avoid trees. Most tree trunks are full of them, as are most branches. Standing under trees for long periods of time is not advised. Avoid wearing brown and green so that you are not confused for a tree. Maybe just avoid nature in general.
5.    Close your chimney flue. This will prevent them from getting into the house via the chimney. If they do get in, make your dog eat them alive. If you’re the gentle (read: LAME) type, capture them in a cup and release them into the wild, or give them to me so I can kill them.
6.    Stay inside until August. A hard tactic to pull off but easily the most effective. But really, who can hold down a job or try to see the daylight when there are bugs the size of baby carrots flying around? 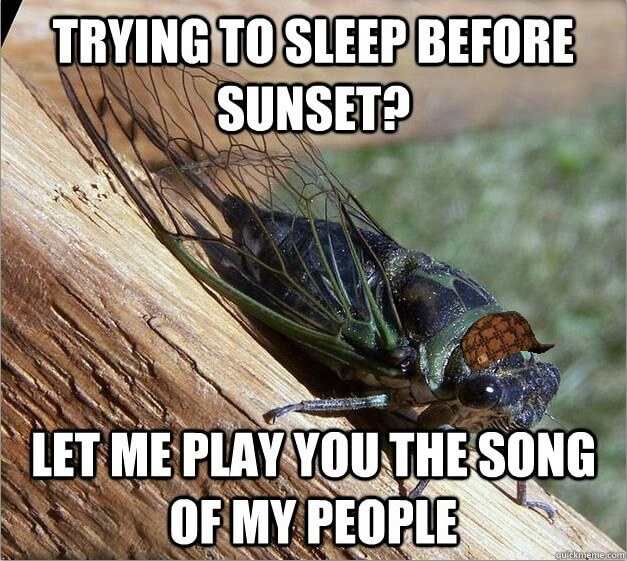