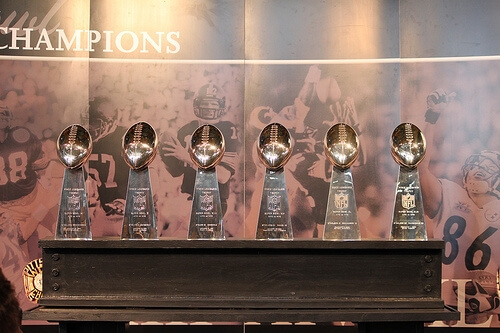 We’re about to commence the first weekend of the season in which college and professional football play on consecutive days. It’s truly a magical time of year. Saturday morning will roll around and all I can do is wake up with a big ole grin on my face, elated for the endless feast of football lined up before me. Here are some good stories out today that popped up in my Twitter feed to satisfy your football hunger.

These will be the contenders

Bill Barnwell rounds out his four-part NFL preview with his eight Super Bowl contenders. The Grantland NFL reporter has done a fantastic job covering the NFL this summer and I’m excited to see what he does over the course of the season. Barnwell likes the Steelers to bring another Lombardi Trophy to Pittsburgh, followed by the Eagles, Chargers, Packers, Texans, Saints, Cowboys and Patriots. You should also check parts one, two and three for Barnwell’s take on the rest of the NFL. Packers-Saints kick things off tonight. Game on, boys.

Everyone's moving and the BCS is just trying to keep up

With all this talk about conference realignment, we shouldn’t forget about the BCS overlords that still clutch the power to crown a champion. Stewart Mandell examines a couple possibilities that would keep the BCS up to speed with the college football landscape whenever the mystical superconferences finally arrive. He predicts the most likely thing to occur is adding the Cotton Bowl as a fifth BCS bowl, followed by increasing the number of teams per conference allowed to participate in BCS bowls. Last on his list: a full-scale playoff. Highly unlikely anytime soon.

Mass realignment would alter BCS' future; the question is: how? > Stewart Mandell > SI.com

Football is different down south

Feeling nostalgic for those high school football glory days? Over the past few weeks Matthew Pierce has been writing about the Brewer Patriots, a high school football team in the rural hills of northern Alabama. The team has a reputation as a doormat and this season looks to be another tumultuous ride. This week’s story is on Brewer’s head coach, Daniel Gullion. The whole series is seriously well written.

“If anyone possessed the life arc to resurrect the Patriots, this would seem to be the man.  After all, he came back.  In this lonely landscape of forested hills and sprawling farms, some of the sons and daughters will claw hand and foot to escape.  Some will never look back.  Out of all that have left, the coach came back.”