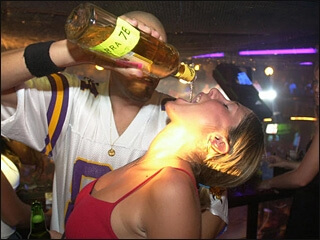 Such Thing As “Too Much Fun”

Megan SpicerSep 12, 2011
Home » Latest Posts » Such Thing As “Too Much Fun”
FacebookTweet

After months of anticipation, getting back to school can be extremely exciting. Out-of-staters get to see their friends again, eating repulsive food at all hours becomes acceptable, and, for many, it signals a time to go nuts with drinking.

“[Students] are definitely more inclined to drink heavily at the start of the semester,” said sophomore Emily Seibert of Quinnipiac University. “The beginning of the semester feels so far away from the end, so the consequences seem less severe and that grade that you wanted to bring up can always be fixed later.”

While some consider it a rite of passage into an overindulgent college world, what may seem like mindless fun can quickly turn into a dangerous lifestyle. Binge drinking is nothing to take lightly, despite the common student mindset that “it won’t happen to me.”

“Nobody wants to think that bad things are going to happen to them,” Seibert added. “Unless you know someone who has been severely affected by alcohol… you don't really think about the consequences. Plus, when you want to have fun, you don't really want to think about all the things that could bring your mood down.”

Seibert has seen a mood-killer moment.

“I once witnessed someone kick through his apartment wall while heavily intoxicated,” she said. “It was sad because the damage didn't even register with him until the next morning, and the anger he had bottled up before then all came out when someone accidentally set him off.”

But why does it take a bad experience for a student to realize that binge and excessive drinking is more hazardous than a good time?  For new students, it’s knowing that Mom and Dad aren’t there to monitor everything that goes on in this new world.

“I believe that it depends on the person’s home life,” said John Michael Cordes, a junior at Western Connecticut State University. “From what I have seen, if people have very strict parents that don't allow them to do very much and they are on their own for the first time, they usually are more prone to ‘go crazy’ per se because … they can get away with more.”

The ball is in your court. You have the option to make the call and know your limits before your story is of the time you went too far. But remember, you can have a fun time playing ball; you just have to call the right plays and make the right moves.