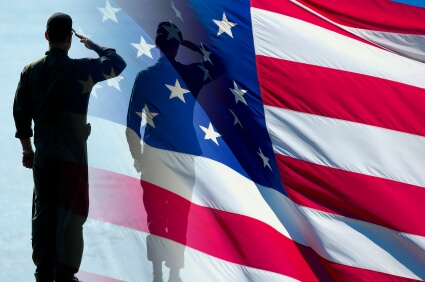 Imagine running through the streets of a developing country with 30-pounds of equipment on your back. It’s hot, and you’re covered with dirt and sweat. The streets are lined with homeless civilians, the occasional wounded body and garbage. Matthew Whitlock of the U.S. Army saw this type of situation during his time in Iraq.

As America celebrates our Independence Day this Fourth of July, student soldiers like Whitlock remember what it has been like to serve in a country that has no freedom, in honor of our own. The 26-year-old recognizes the holiday as a day to appreciate more than our country’s independence. “I am thankful for others who have fought for our freedom…they have always been heroes and will always be heroes. Most Americans have some sort of understanding of the sacrifices we have to make.”

According to the National Center for Education Statistics, the U.S. has over 25 million students between the ages or 18 and 24 enrolled in American colleges. The everyday college student spends their Fourth of July celebrating America’s independence with friends and family. But beyond the barbeques and fireworks, it is important to remember and celebrate the soldiers who have served and sacrificed their lives fighting for our nation.

“I’m glad that people recognize our sacrifice and are thankful for what they have,” says Whitlock.

Whitlock, like many other soldiers, hasn’t had the average college lifestyle. After attending SUNY Albany for two years and Ocean County College in New Jersey for a semester, he joined the military. Whitlock will leave the active Army within the next few months with plans to attend the University of Washington – Tacoma as an accounting major.

But not all soldiers are able to move forward like Whitlock. Frank Wulff of the U.S. Air Force and National Guard, was deployed to Iraq at just 20-years-old in support of Operation Iraqi Freedom. Wulff put his education on hold and missed an entire year before returning.

“I was at the end of my sophomore year at the New Jersey Institute of Technology (NJIT) when I was deployed,” says Wulff, who served as an F-16 Jet Engine Mechanic, working in aerospace propulsion.

Wulff returned home a year later after his 12-month tour and continued his college education. Returning as a college student, now in his senior year at NJIT, his perspective has changed. “I don’t take anything for granted, and I tend to appreciate the little things more,” he says. “It helped me to see things slower and enjoy them, rather than be rushing around all the time.”

But for student soldiers like Daniel Tworkoski, the last three years in the U.S. Army have made a difference in other ways.

“Three years ago, I didn’t understand anything about the wars our country was fighting,” says Tworkoski. “I didn’t have a good idea of what goes into it. It’s one thing to see a face on TV of a fallen brother. But when it hits home, you get a better understanding of what the Declaration of Independence means and what is necessary to protect that independence.” For these three soldiers, the Fourth of July is still a holiday to spend with family and friends, but also a celebration of our country’s freedom having personally seen one that has none.

Wulff suggests that other students can help show their support by volunteering forprograms such as the Wounded Warrior Project or supporting other veteran based groups. However, a simple gesture can make all the difference during this holiday. “The biggest thing would be to take the time to say thanks to someone who has served and given so much,” says Wulff. “It’s the little things that mean the most.”

Previous Post:Make a Statement
Next Post:First Steps to Studying Abroad