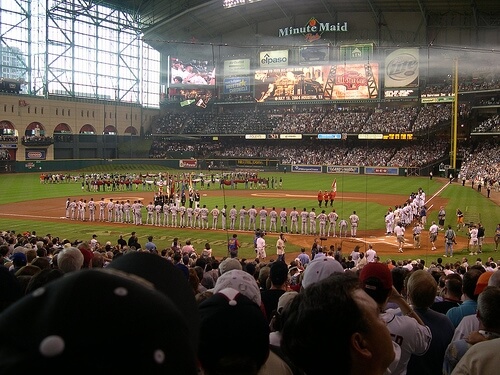 Don’t Complain About the All-Star Game

Please stop complaining about how fan voting for starters is a popularity contest. OK, it is. But this game is for the fans, remember. We should be able to pick who we want to see play. Beside, it isn’t like internet voting is some sort of impenetrable institution totally immune from underdog movements. We got Peyton Hillis on the cover of Madden using internet voting. We got Baby Mangino elected Sportshuman of the Year 2008 using internet voting. So, we could get Hunter Pence starting for the N.L. if we wanted to.

Please stop complaining about how every team must have a representative in the game. Guess what – there are millions of children out there that are fans of the Kansas City Royals, Washington Nationals, Baltimore Orioles and San Diego Padres. Those kids deserve to see a guy from the team they love (and, MLB hopes, will love for life) announced to a national television audience wearing road grays that read “Kansas City” and “Baltimore” and home whites that say “Nationals” and Padres. In my book, having Aaron Crow, Tyler Clippard, Matt Wieters and Heath Bell in Phoenix is just as important, if not more, as having Fielder, Ortiz, Jeter and Reyes in attendance.

Please stop complaining about how many of his own players the league manager selects. First, the guy earned the right to select his guys by getting to the World Series the previous year. Second, I love the tradition of having last year’s World Series managers manage the All-Star game, because it allows us to look back. And by look back, I mean think, “How the hell did this guy manage a team to the World Series?” Bob Brenly was the Babe Ruth of this phenomenon.

And, please stop complaining about the winner gets home field in the World Series set-up and the relatively boring nature of the game. The home field thing isn’t perfect, but it does make the game count. It’s also better than the alternatives – awarding it based on interleague play (the A.L. would win every year from now until the sun engulfs the earth), best record (100 wins in the A.L. is roughly 115 in the N.L.) and a year-by-year rotation (it’s amazing it was done this way for so long).

As for the game being boring – it’s an All-Star game. It’s not always going to be the best thing going. Compared to the other sports, baseball has the best one by far. The NFL’s is a joke with half the players suddenly developing injuries that prevent their participation. The NBA’s consists of a) both starting lineups doing pregame dance routines, b) no one playing defense and/or acknowledging the traveling rule for three quarters and c) one guy deciding he’s going to actually play hard as he scores 20 points in the fourth quarter and wins the MVP award. And the NHL’s? I’m pretty sure they just randomly decide to have their game one weekend, and hope people realize it’s happening then.

There are reasons to complain – these two guys being the prime ones – but the positives outweigh the negatives. So stop complaining America. You’ve got it pretty good with the Midsummer Classic.

Previous Post:HP Premiere works magic
Next Post:Sex is No Tool