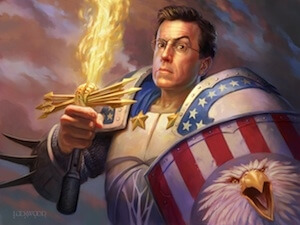 Josh AxelrodJan 17, 2012
Home » Latest Posts » Stephen Colbert’s American Dream
FacebookTweet
Ladies and gentlemen, meet your future president of…South Carolina?
It was only last Wednesday that Stephen Colbert, in a move that only he can get away with, formally announced his intentions to create “an exploratory committee to lay the groundwork for my possible candidacy for the president of the United States of South Carolina.”
Now he’s following through, with a little help from Jon Stewart and “The Definitely Not Coordinating With Stephen Colbert Super PAC.” Their primary objective: make outrageous claims about other candidates that are so hilarious and spot-on that people might actually take them seriously.

The Colbert Super PAC’s first smear ad, narrated by Jon Lithgow, attacks Republican frontrunner Mitt Romney. It takes Romney’s “corporations are people” declaration to a dark and hysterical place, assuming that, since Romney has been known to buy companies and “carve them up,” he must be serial killer “Mitt the Ripper.”

For anyone who thinks Stewart and Colbert are making a mockery of the political process, you’re absolutely right. But considering this group of GOP candidates has basically been participating in a giant episode of The Real World: America for the past year, how could the two comedians not try a stunt like this? They’ve lampooned every other aspect of this presidential race, so why not parody a campaign itself?
The sad part is, Colbert would actually have had a chance in South Carolina. The only reason he’s doing this is because of a Public Policy Polling survey that showed he had five percent of South Carolina’s vote before he even announced his fauxpaign. This was ahead of actual candidate Jon Huntsman, who only had four percent of the vote.
Is Huntsman’s withdrawal from the GOP race due to the fact he was polling behind a candidate who didn’t exist yet? Probably not, but it was definitely eye opening. Republicans have been looking for an alternative to Romney since Chris Christie and Sarah Palin decided not to run. Colbert might’ve been able to steal some votes from Romney purely because people are looking for someone, anyone else to take his place.
Ultimately, none of this speculation matters because South Carolina doesn’t allow write-in candidates on its ballot. But in a world where Colbert is allowed on the ballot as a legitimate candidate, the under-30 crowd (especially the college kids who get most of their news from him and Stewart) might propel him to…well not victory, but more votes than he deserves.
If the word “truthiness” is allowed in the dictionary, why can’t Colbert be the president of the United States of South Carolina? All he wants is fame, respect and power beyond the Colbert nation. Constantly seeking more, now mattter how much you already have: the definition of the American dream.
Photo: at http://colbertrally.com/
FacebookTweet
Life

Previous Post:Top 10 Songs In a Sports Video Game Soundtrack
Next Post:Getting Back in the Dating Game