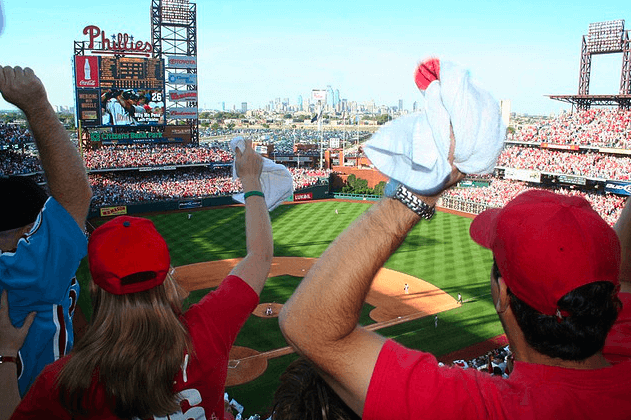 The Philadelphia Phillies lost last night, 2-1 to the New York Mets in extra innings. What on the surface appears as just another divisional matchup in May lends greater meaning if you listened closely to the sounds of Citizens Bank Park that began quietly in the top of the ninth inning:

The Phillies’ fans were reacting to the new that spread quickly throughout the ballpark that Osama Bin Laden, the world’s most wanted terrorist and the man most responsible for the attacks on the United States on September 11, 2001, had been killed.

In a breaking news address to the Nation last night, President Barack Obama informed the country that a U.S. armed force infiltrated a mansion in Pakistan and, after a brief firefight, killed Bin Laden and captured his body which was returned to the United States.

"[Bin Laden’s] demise should be welcomed by all those who believe in peace and human dignity," Obama said.

The news of Bin Laden’s death traveled by word of mouth throughout the ballpark, and by the end of the ninth inning, it was clearly audible to the national audience watching the game from home on ESPN.

“I don’t like to give Philadelphia fans too much credit, but they got this one right,” Mets third baseman David Wright said after the game.

The atmosphere on the field was undoubtedly affected by the fans’ cheers. It is very possible that most of the players didn’t know what had happened until the Phillies’ fans gave them a hint. The fact that New York and Philadelphia were on the field, two cities that were obviously greatly affected by 9/11 contributes an even greater meaning to the game.

"I asked what was going on with all the yelling 'U-S-A, U-S-A,'" Mets reliever Pedro Beato said. "I just asked [pitching coach John Debus], and he said supposedly they caught bin Laden."

"It's probably a night I'll never forget," Mets starter Chris Young. "There are some things bigger than the game and our jobs. I was inside. You could hear the crowd chanting, 'U-S-A.' And I got chills hearing that. It was a pretty neat atmosphere and place to be to get that kind of news.”

Philadelphia is universally recognized as the most hated sports city in the country. Specifically, Philadelphia fans are often criticized for booing too often and expressing criticism without a heart.  With their touching moment of patriotism last night, Philadelphia sports fans have taken a step in the right direction of winning over the hearts of the rest of America.

Previous Post:Conquering Phone Interviews
Next Post:We We We So Art-Cited… Again!