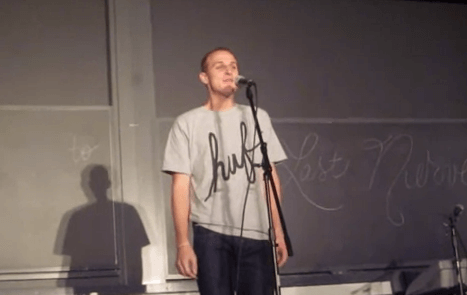 Hipster culture has revived many wonderful artifacts of hippie-dom like funny mustaches and folk music. Poetry is no exception.

As you probably don’t know, April is National Poetry Month, which means poets all over the U.S. are sitting in dark rooms with a bottle of wine and bottled up emotions doing “30-for-30s” (Writing one poem a day for the 30 days of April). Austin Bay, a senior at Boston University, is way too busy to be writing poetry all day, but is one of the well-known members of Speak for Yourself, a student-run spoken word poetry club at BU.

Spoken word is the art of writing poetry for the ear. Poets are expected to memorize their works and recite them on stages for the pleasure of a diligent crowd. All this usually takes place in a dimly lit room, give or take the occasional bongos. Well… almost. Spoken poetry is a growing art that’s becoming so popular, bars and cafés are hiring poets, like Austin, to perform as a “feature.”

As with all artists, the question we’re dying to ask is where do they get their inspiration.

Austin's began back in his middle school days. “I started writing because I was a moody preteen with a lot of emotions,” says Austin. He looks to poetry as his outlet because it feels organic and natural to his self-expression. Sounds like a typical college Friday night minus half the guilt.

One of the coolest parts of spoken word is the way it’s delivered. Watch Austin perform in a local bar, and you'll feel the energy of the whole room focusing on his story is nothing short of powerful.

Austin told me, “being a featured poet is a phenomenal experience that allows you to perform more than one piece,” which really gives the audience insight into your persona and beliefs. It’s an extremely intimate experience.

A political science major, Bay is in the process of applying to grad school. “I do not plan on being a professional poet,” he said. “After college I plan to have a lifestyle that allows me the time to write, and spend time working on my performances.”

Until then, Austin continues to get bookings at clubs all around New England. But being a poet doesn’t mean there’s no pressure involved. “One time I thought I forgot my lines, and I realized I was going to cry on stage, so I had to choke back my tears before I could move on.” This is just one of the everyday hazards of a poet, where missing one word in a dead-silent room, full of listeners hanging on each word, can mean the difference between snap and scoff.

If National Poetry Month teaches you one thing, learn that poems aren’t just for books. This reporter highly suggests you let spoken word into your life and check out local bars that feature poets. You can even find spoken word on Spotify. Check out poets Andrea Gibson and Buddy Wakefield for spoken word beginners. The following is a piece Austin wrote about his grandmother and, not gonna lie, I teared up a bit:

Previous Post:Jackie Robinson, The Original MLB Game-Changer
Next Post:Is it true about grapefruit?