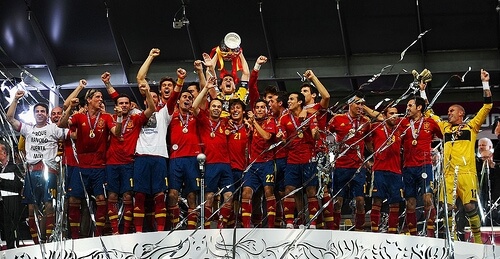 Danny GoldenJul 2, 2012
Home » Latest Posts » Spain tramples Italy in Euro 2012 Finals
FacebookTweet
After Sunday’s 4-0 thrashing by the Spanish, the Italians were left shaking their heads in disbelief and the rest of the world was shaking their collective head in awe. The “Roja” were a freight train all tournament long, trampling any and all teams that were brave enough to take the pitch with them. The stout back line and superb goalkeeping by Iker Casillas held opponents to one goal… in the entire tournament.
So the soccer world will be debating over whether this Spain team is the best ever, and with good reason. They’re the first team to win three major tournaments in a row (Two Euros and one World Cup) and they did so with relative ease. But there were other storylines in this year’s Euro Cup worth noting:
Super Mario
The oft-erratic Italian striker Mario Balotelli may have been as crazy as ever but the man can sure find the back of the net. The forward had three goals in the Cup, two of them coming in Italy’s semifinal upset over Germany. Mario was creative with the ball all tournament long, and he still has many good years ahead of him. That is, assuming he doesn't get caught tresspassing at a women's prison again.

The Orange put up a goose egg
Although they might not have been the tourney’s favorite coming in, most saw the Dutch competing in a tough Group B, the so-called “Group of Death.” By the group stage’s end, the usually tough Holland team had amassed a grand total of zero points. They lost all three group stage matches by a goal, but all that matters is the table. Looks like it’s back to the drawing board for the Dutch.
Wild Group A
After two group stage matches, Greece had a total of one point off an opening draw with Poland. But in a wild last day of group play, the Greeks beat a favored Russia team and advanced to the knockout round in dramatic fashion. They would lose in the round of eight but their heroics were a big story for a country in need of some hope.
Watch all four goals socred by Spain during the Euro 2012 Finals:
FacebookTweet
Life