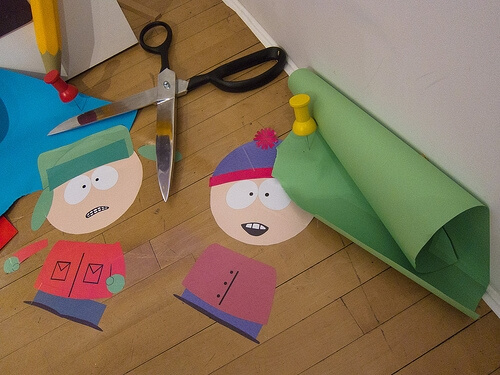 Leave it to “South Park” to compare NCAA athletes to crack babies.  Only Matt Stone and Trey Parker have minds demented enough to tackle an issue as divisive as the NCAA exploiting student athletes by having Eric Cartman start a Crack Baby Basketball Association.

The allegory they present isn’t very complicated: Cartman at one point visited the University of Colorado at Boulder, a school known for its football scandals, for advice on how to take advantage of his athletes by using their likenesses for an EA Sports video game.  He wore a white suit, a cowboy hat, spoke in a bad Southern accent, and at certain points even referred to his crack babies as “slaves.”

Linking college athletes and slaves might be a bit excessive, but as usual “South Park” puts a unique spin on a topical issue. In this case whether those who participate in college sports should be compensated for their work.  The episode was probably sparked by a series of high-profile college football scandals, including ones involving former Auburn quarterback Cam Newton and, most recently, Ohio State’s football program, mainly former quarterback Terrelle Pryor and disgraced coach Jim Tressel.

As usual, Cartman gets his comeuppance when he sells the CBBA rights to EA, thus allowing the game company to be the only one to profit from the crack babies. Everyone but the athletes is legally making money from their talent and success.  As IGN.com’s Ramsey Isler said in his review of this episode, “It is still a great travesty that top academic professors wallow in relative poverty compared to NCAA coaches who rake in millions.”  When you put it like that, it sounds like the players deserve some sort of reimbursement for their efforts.

Unfortunately, nothing is ever that simple.  Unless you’ve been tuning out the Ohio State scandal, you know that it is not uncommon for some college athletes to receive Pryor-esque unauthorized benefits.  Top players are also riding full scholarships, are probably valued by their school more than the class president, and have most likely never had to pay for a meal on campus.  Their lives are far from slave labor.

The main problem seems to lie with the NCAA system itself.  Its financial practices involving athletes leave the door wide open for corruption, back-alley deals, and embarrassing situations.  It appears that an overhaul of the system is necessary, but no one has come up with an acceptable solution that makes all parties happy.

If the colleges were to pay players, would they pay them all the same salary? Should a starting quarterback earn more than a third string lineman? Or, for that matter, a star women’s volleyball player?  How could the NCAA ensure the end of sleazy practices that cause more problems than anything else?  Most importantly: Where would the money come from?

The one thing Matt and Trey never did provide was an answer to this conundrum. This is one of the few cases where they chose not to justify their satire with a proposed resolution.  If these two usually fearless guys aren’t willing to offer more than a “players=slaves” analogy, it will probably be a long time before we see any real progress.