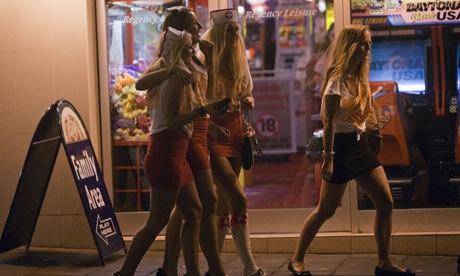 Josh AxelrodOct 15, 2012
Home » Latest Posts » Slut Dropping: A New Low
FacebookTweet
Everyone knows what slut shaming is at this point, right? You know, the thing where some members of the male species think it’s okay to humiliate or even abuse a girl based on what she‘s wearing or her perceived promiscuity. Well, let me introduce you to a new form of slut shaming that is trending in the U.K.: slut dropping.
Universities in the U.K. apparently aren’t quite as subtle about their hazing practices as U.S. schools are (most of the time). There's a tradition over there known as "Freshers' Week," which is similar to pledging a fraternity or sorority in terms of its hazing rituals. Being a freshman girl is especially unfortunate during this week o occasional slut shaming.
One Freshers’ week activity that young British bros have taken a fancy to lately is slut dropping. The concept is pretty simple: according to U.K. news site The Independent, male students drive around looking for girls in a “post-club state” (i.e. schwasted). They pick her up, ask her for her address and drive far and fast in the opposite direction of her place. Then they strand the poor girl and leave her to find her way home. It’s basically kidnapping lite.

“I’ve only heard one example of it,” said Everyday Sexism founder Laura Bates to The Guardian. “I don’t want to suggest it’s a national trend. But it is just one example of what seems to be a disturbing wider phenomenon. On the one hand, women are being told that they’ve got to go to all these clubs nights dressed like a slapper or a slut. And on the other hand they’ve got these boys deriding them for that. It’s a double bind.”
It is quite possible that this slut drop was an isolated incident. Oscar Tollast, a senior at Bournemouth University (located on the South West coast of the U.K.), had never heard of it, but he also said that the existence of something like slut dropping didn’t surprise him at all.
“Obviously, what’s reported in that article [in The Independent] is at the extreme/disrespectful end of the Freshers’ week spectrum,” said Tollast. “But most other Freshers’ week activities are an excuse to drink, have fun and make new friends.”
I’m sure no one intended for Freshers’ week to turn into a breeding ground for slut shaming, but this is pretty incriminating evidence that it has morphed into just that. Being from the states, I obviously have no point of reference here. All I can say is that I hope slut dropping does not become a thing in the U.S.

Girls have enough to worry about when they go out at night, let alone dealing with the possibility of being slut dropped. Hopefully we won’t take after the Brits and adopt this ridiculously demeaning pastime (ugh, it’s a pastime). Of course, as Tollast reminds us, this might be more of a disgusting fad than a trend.
“We’re not monsters, although we do have our fair share of idiots,” he said. The U.S. knows the feeling.
Photo: at The Guardian
FacebookTweet
Life