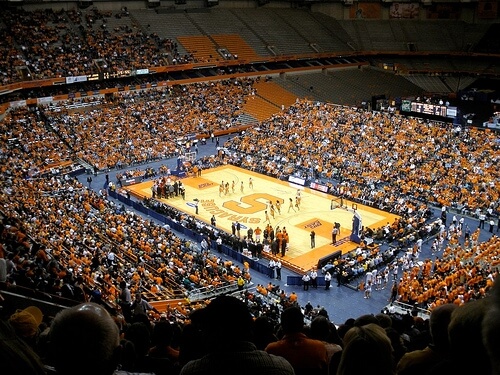 *Note: All of this is subject to change in an instant as is the nature of the college football landscape at the moment.

Right as I was heading to bed, Andy Staples has the scoop. The Pac-12 is NOT expanding. Here's the statement he posted on his Facebook page:

PAC-12 AFFIRMS DECISION NOT TO EXPAND

WALNUT CREEK, Calif.– In light of the widespread speculation about potential scenarios for Conference re-alignment, the Pac-12 Presidents and Chancellors have affirmed their decision to remain a 12-team conference. Pac-12 Commissioner Larry Scott said, “after careful review we have determined that it is in the best interests of our member institutions, student-athletes and fans to remain a 12-team conference. While we have great respect for all of the institutions that have contacted us, and certain expansion proposals were financially attractive, we have a strong conference structure and culture of equality that we are committed to preserve. With new landmark TV agreements and plans to launch our innovative television networks, we are going to focus solely on these great assets, our strong heritage and the bright future in front of us.””

We'll have more on this on the first closing door in the conference expansion game tomorrow.

While the Pac-12 closed its door on further expansion, the head honchos of Big East football met and pledged their undying love and affection for each other. Here's the official statement from the Big East website:

Our membership met this evening and we are committed as a conference to recruit top level BCS caliber institutions with strong athletic and academic histories and traditions.  We have been approached by a number of such institutions and will pursue all of our options to make the BIG EAST Conference stronger than it has ever been in both basketball and football.

So the Pac-12 door closed but now the Big East door is wide open with TCU in hand. Their options? As was reported earlier, Navy and Air Force were in talks to join the league and ECU applied for membership again. I would throw the University of Central Florida into that pot as well. Its name has been thrown around in the past when it came to expanding the football side of the Big East. Again more on it all tomorrow.

Just broke. We've heard this before, so take it with a grain of salt. If it's true, we should see decisions about the Big 12's future much faster than anticipated.

The Southeastern Conference and the University of Missouri have informally agreed that, barring new developments, the school will join the league and that Auburn University will move to the SEC East Division, according to two people familiar with the discussions.

A majority of presidents has endorsed the informal agreement, the sources said.

WVi and Pete Thamel are both reporting WVU hasn't been rejected from the SEC or ACC. I'm with Thamel, though, not a chance WVU is admitted into the ACC.

Navy, Air Force and ECU all riding in on white horses to salvage the football league? Could be interesting.

Brett McMurphy, who reported earlier today WVU was turned down by both the ACC and SEC, says Navy was nearing admission to the Big East. Air Force was also in the mix to join. Also a nugget in there on tonight's Big East meeting.

However, with the Big East’s future now in limbo, it’s uncertain if Navy and/or Air Force will remain interested in joining either a Big East without Pitt and Syracuse or a merger of leftover teams from the Big East and Big 12 conferences. That is, in fact, if the Big 12 loses Oklahoma, Oklahoma State, Texas and Texas Tech to the Pac-12.

The meeting is for the league’s decision makers to gather face-to-face and see who wants to be a part of the Big East’s future.

“If they don’t want to be in the league, then they should make their intentions known and leave,” said one league official.


Out on the plains, it looks like Oklahoma is going for a power play to keep the Big-12 together. Berry Tramel of The Oklahoman is reporting OU will keep the band together only if they get finger sandwiches in the dressing room! NO NEGOTIATIONS! Oh and they might want Big 12 comissioner Dan Bebee, among other things

After WVU is reportedly denied by both the ACC and SEC, Big East officials and football members will meet in New York City tonight to discuss the future of the conference. Villanova will wait in the lobby, still begging to play football.

How We Got Here:

Over the weekend there was an all points bulletin sent out to college football fans: Shots fired; Syracuse and Pitt to the ACC.

And just like that, everyone went running for safety.

The basketball conference that was supposedly about to be pillaged by the SEC decided it had enough and pulled the trigger and beat everyone to the pillaging. Since then, the chatter about who’s going where and who’s going to be left out of the new superconferences has been mind numbing. I’ve been keeping up with all this talk and have complied a list of links from yesterday and today about the shifting college football landscape.

First, though, before I go all doom and gloom, here's a knee-slapper:

There still seem to be big hurdles for Texas and Oklahoma to clear in their move west and who knows when it will happen. But, the boards of regents at both school approved the university presidents to act in the best interest in the university.

And Oklahoma State? It’ll follow Oklahoma to the ends of the earth.

Meanwhile, the Big East is on life support. The newest member, TCU, is probably second guessing its decision or at least trying not to hang itself. The Mountain West is outside of TCU’s window and just wants to talk.

I think people rushing to assume the Big East is a sure-fire goner have to remember that the conference still has the coveted BCS bid and the keys to Madison Square Garden. Those are two valuable assets people are overlooking. With those two assets in mind, these teams that could be potentially out in the cold have considered aligning themselves into a brand new conference. Certainly worth keeping your options open.

Rick Pitino compared Pitt and Syracuse’s move to the ACC to the Godfather.

Baylor is releasing propaganda on superconferences.

Yesterday, Clay Travis said there’s no way WVU would go to the SEC. Today he was right.

Dana O’Neil has a great read on the sliminess of all the conference shifting.

And during these times of headaches, bitching and moaning, and the awfulness surrounding it all, SI.com’s Andy Staples had some real talk for everyone: