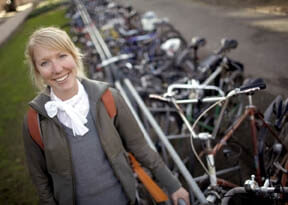 At 6:45 a.m. on any given Tuesday this semester, Western Connecticut State University senior Daniel Kerce will be waking up to start his busiest day. He goes about a normal morning routine and heads off to school.  But, instead of walking out the door of his dorm, he puts a key in the ignition of his 2001 Camaro and pulls out of his driveway for his 8 a.m. class.

After class, he heads back home for lunch, a quick workout and to peck away at his homework. But that’s not the end of his day. At 1 p.m. he heads back to school until 8 p.m.

Campus isn’t a second home for him like it is for some students; he feels disconnected from the university and is completely aware as to why.

“I don’t know that many people or feel I need to make friends because I don’t want to be up there more than I need to be,” he said. WCSU has a high commuter rate with a mere 28 percent of undergraduates living on campus.

While he would like to feel more connected to the school, Kerce still wouldn’t want to live there.

“It’s too close to home and the food there is horrible,” says Kerce who has a about a 20 minute commute to class. “They don’t give you enough per meal. I’d have to transfer to UConn if I was going to live at a school.”

WCSU, according to Kerce, tries to accommodate for the commuters with a commuter breakfast that they host once a semester.

“I never go because it would mean another drive up there,” Kerce said.  “For the price of the gas, I can have a breakfast at home.”

Unfortunately, Kerce doesn’t really know what more the campus could do for commuters that don’t feel part of the community. “Anything that they try nobody would want to do because we have to drive to get there.”

Being a commuter on campus can be a difficult thing. A majority of events cater to residential students, leaving commuters to feel a sense of disconnect with their school. What’s the solution to the problem at hand? Here are a few suggestions.

Get involved in on-campus organizations. It seems simple enough. Many and most universities have a myriad of clubs and organizations that tailor to every walk of life. Find what’s best for you and jump right in. Don’t forget about intramural sports. They are an awesome way to not only form a bond with teammates but to get more exercise than opening and closing your car door.

Get a part-time job on campus.By working on campus, you’re forced to interact with other members of the university (and you’d be getting paid). Often times, your co-workers become your friends and the end of a shift could become the start of a night out.

Form or join up with a study group.It’s bonding in the simplest way. Everyone is looking to better themselves while talking over why they may or may not like the class, though the latter seems more realistic.