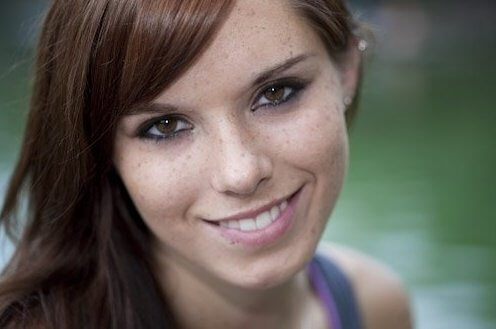 She Can Keep A Secet: CM Interviews TerpSecret’s Sarah Tincher

Josh AxelrodFeb 8, 2012
Home » Latest Posts » She Can Keep A Secet: CM Interviews TerpSecret’s Sarah Tincher
FacebookTweet
It’s not everyday that The Washington Post wants to do a feature on a college sophomore. Of course, Sarah Tincher is no average sophomore. She’s the mastermind behind TerpSecret, a University of Maryland-specific spinoff of PostSecret that has grown from a humble WordPress blog to a mini phenomenon.
A Place To Feel Safe
For the uninitiated, PostSecret was created by Germantown, Md. native Frank Warren as an outlet for people to anonymously share their secrets on the Internet without fear of judgment.

Tincher was in a great mood when we talked the day after her Giants won the Super Bowl. You would have never guessed she had suffered through bouts of depression for the first 19 years of her life, which was the main reason she became an avid PostSecret user.
“I’ve been battling with things like [depression] my whole life, so seeing it on PostSecret helped me then,” admitted the Brunswick, Md. native. “A big thing with depression is that you feel very isolated and alone. When you know you’re in a huge pool of people with the same issues, you feel a lot more like a normal person.”
Media Blitz
Tincher has been, as UMD’s student newspaper The Diamondback put it, the “secret keeper” since July. After TerpSecret started receiving media attention, she decided it was okay to provide a name and a face for her adoring and appreciative fans.
“I’m not doing it to get credit for it or for people to know who I am,” said Tincher. “I’m [also] not trying to hide it either or be Batman about it. I don’t want people to think I’m doing it to get some kind of recognition.”
Sometimes the spotlight is thrust on you whether you ask for it or not. For Tincher, it began to move in her direction a couple of months ago when the Active Minds at Maryland organization saw a poster she made and held a TerpSecret event. Then came the Take What You Need flyers, as you can see below:

That’s when media outlets like The Diamondback and The Washington Post decided her story was worth telling.
“I was freaking out!” Sarah said of her reaction to getting that email from the Post. “Not just because of TerpSecret, but because I’m a journalism major and that excited me a lot. I bought like five newspapers for my parents. It was surreal.”

Find schools
With Great Power Comes Great Responsibility
As I told Tincher during our interview, she must have the nerves of a goddess. It can’t be easy reading posts like this on a daily basis:
““When I was four, I was sexually abused by two brothers that lived in my neighborhood. When I was seven, the same two brothers taught me to ride a bike.
When I was four, my own brother stood in the same room and watched. When I was seven, he walked away.”
That’s heart-wrenching stuff. How does she handle it without relapsing into dangerous mental territory?
“The fact that people are confiding in me is something I take seriously,” Tincher said. “Sometimes they are really hard to read and just brush over. I can’t be like, ‘Oh, this person is having a really hard time. No big deal.’ It’s always a big deal to me.”
She has been known to personally respond to the more extreme stories and tell those people that she’s there for them. Sometimes, people tell her that the fact she took the time to respond to them made their week.
“I really do care about everybody who sends me something,” Tincher said. “It means a lot to me that they do it and I really hope they’re getting something out of it.”
Set For Life
When Tincher asked a professor if she should put TerpSecret on her resume (before it got big), she was told that it probably wouldn’t help her much in the journalism world. Now she’s reconsidering that advice.
“Just having my name out there – not as a journalist but as a person – matters,” she said of her early journalistic success. “Just getting the publicity with The Washington Post [gave me] a connection. Making the contacts and existing to the world will help me.”
Those are some wise words from a young journalist whose star is rapidly rising. Though, from my experience at least, Tincher is almost a little too humble. She described herself as the type of person who doesn’t always know how to react to good fortune.
“All my friends are like, ‘Oh my god, you’re a celebrity!” she said. “One of my best friends was posting stuff to Facebook and being super supportive. She was like, ‘I honestly think I’m more excited about this than you are!’”
Tincher isn’t exactly arguing with her 15 minutes of fame, but she’s happier about the way TerpSecret is making a real difference in the lives of people who really need a friend.
“I’m more excited that people are enjoying it than I am about being in the newspaper,” she said as she took another huge bite of humble pie. “I plan on being a journalist and seeing my name in a newspaper more than once. I’m just ecstatic that people are getting something out of all this work.”
FacebookTweet
Celebrity Advice Life

Previous Post:Celebrating Single On Valentine’s Day
Next Post:Oh, Sometimes…I Get a Good Feeling