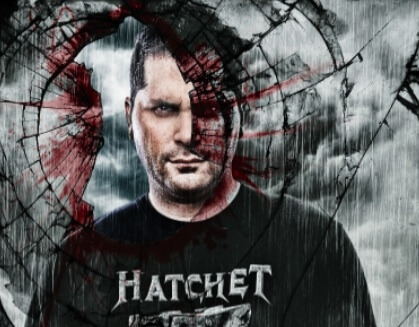 Consider yourself lucky that you didn’t go to summer camp with Adam Green, because he probably would have made you cry in your bunk bed.  When the counselors warned their campers that somebody named “Hatchet Face” would get them if they went near a certain cabin (where, it turns out, the counselors partied), eight-year-old Adam wasn’t intimidated like his friends.

Late one night, he came up with the story of “Hatchet Face”—a deformed boy who was accidentally murdered in that cabin, and still haunted the woods surrounding it; and if you listened closely, you could hear the boy screaming into the night. “Everybody started crying, getting upset, the counselors called my parents to send me home from camp,” Green remembers.

At the time, they probably weren’t able to see the bright side of the situation: “Hatchet Face” would eventually evolve into Victor Crowley, the crazed killer lurking in the Louisiana bayous in the 2006 slasher movie Hatchet, written and directed by Adam Green.  The gore and “cartoonish” violence in the movie thrilled audiences who, like Green, were fans of classic slasher flicks like Halloween (1978) and lamented the more recent trend of what Green calls “slasher movies with no slashing.”  In 2010, Hatchet II brought even more blood—165 gallons of it, to be exact—which made the MPAA squirm so much that they gave the film an NC-17 rating, much to Green’s dismay: “Nobody’s ever walked out of a Hatchet movie disturbed or having nightmares…” Even after AMC movie theaters agreed to screen the unrated version of Hatchet II, the controversy continued when it was pulled out of the theaters on opening weekend with the official explanation of “not bringing in enough money.”
While writing and directing his own movies is a dream come true for Green, he’s familiar with the many obstacles that lay in the process, whether it’s dealing with the MPAA or getting other people to believe in your vision.  “If enough people tell you no, it’s never gonna happen, then you sort of become hell-bent on making it happen,” he says.  “[It takes] a lot of ambition and really, really hard work.”  For example, even though Green’s other recent movie Frozen (a terrifying story about a group of friends who get stuck on a chairlift for days) was released without a hitch and was generally well reviewed, the lack of promotional funds available was somewhat disappointing.

In spite of the struggles involved, Green emphasizes the importance of never giving up and advises those who want to pursue a career in film to “actually do what you say you want to do.”  After graduating from Hofstra University with a degree in television and film production, Green got a job making what he calls “really, really bad local cable commercials,” and then borrowed the company’s equipment so he could produce his own stuff after work.  From there, he worked his way to the top by simply never giving up. Green’s best piece of advice? “Don’t listen to all the people who say no, because if I can do this, you can do this.”

Want to watch something this Valentine’s Day that won’t make you feel bad about being single?  Adam Green says horror movies are your best bet.  Pick up a copy of Hatchet II or Frozen, both available on DVD and Blue-Ray.  Forget about being alone, you’ll be happy you’re alive.