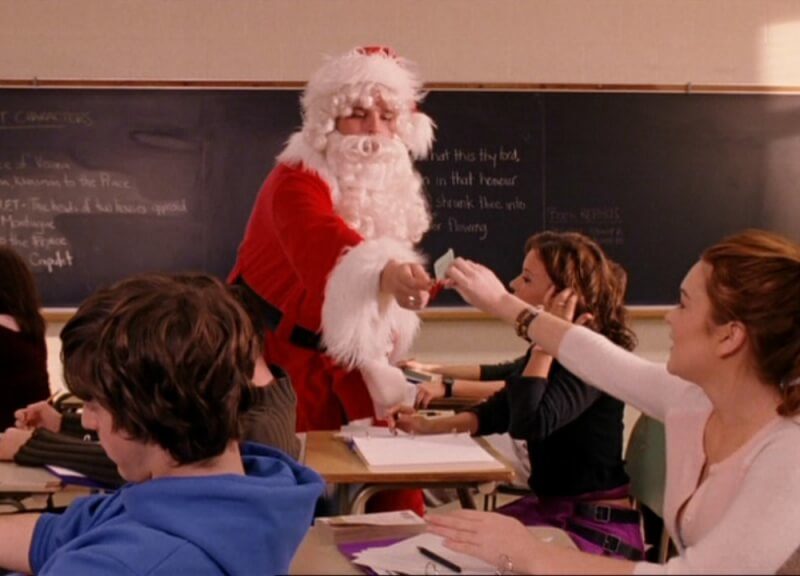 With the holiday season approaching, there’s one guy that no one can resist, no matter how big his beer gut may get. Big, red, and jolly, Santa never disappoints. Here are College Mag’s favorite cinematic Santa moments, and why they make us ever so jolly.

The moment was fast, furious, and people are still quoting it to this day. What seemed like an innocent Candygram delivery by a poorly-suited, Plastics-loathing Santa turned into one of our favorite movie moments. We think a quote will do:

Despite the questionable casting and terribly vulgar language, this flick is still a favorite for college students nationwide. And how could we resist a movie with a misguided and overweight preteen, outspoken midget, and a Santa that prefers liquor to cookies? Look, maybe there’s been more legitimate jolly red men over the years, but this one is definitely on our list of Santa’s we would love to party with! While the whole movie is one to remember, this Billy Bob one-liner has got to be our favorite;

Although this investment-banker-slowly-turned-Santa needed some convincing at first, what better way to get a not-so-jolly guy into the Christmas spirit than by making him into Kris Kringle himself? Complete with an initially concerning weight gain and unprecedented hair growth, Tim Allen made for a Santa we won’t soon be forgetting.

Here’s our favorite line, delivered by Bernard the Elf: “The Santa Clause: In putting on this suit and entering the sleigh, the wearer waives any and all rights to any previous identity, real or implied, and fully accepts the duties and responsibilities of Santa Claus, in perpetuity until such time that the wearer becomes unable to do so, by either accident or design.”

A truly timeless classic, A Christmas Story brought to life some age-old conundrums many children find themselves facing in some form or another during the holidays. Complete with over bundled sledding sessions, an angry ginger bully, and a soapy mouth washing for using a non-Santa approved word, this film’s best moment has to be the ever-haunting warning against Ralphie’s one and only desire; a Red Ryder BB gun. Even the jolly mall Santa couldn’t cut the kid a break, with this infamous quote:

While our other Santa picks may earn us a spot on the Naughty List, this Santa moment is memorable not for its shock value, but the heart-warming effect that only the holiday season can bring. With New York City all lit up and everyone in the holiday cheer, no one made the movie more worthwhile than Kris Kringle himself making an unannounced appearance, something that has reminded audiences for years that Christmas magic is still alive and well.

“Doris: Would you please tell her that you're not really Santa Claus, that actually is no such person?

Kris Kringle: Well, I hate to disagree with you, not only IS there such a person, but here I am to prove it.”

Previous Post:Going From A Hookup To A Relationship
Next Post:We Are Never Ever Ever Gettingâ€¦ Hired